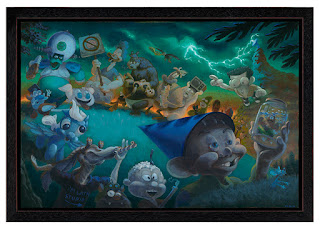 Unlike real life Homers such as NASA engineer, Homer Hickam, activist, Homer Plessy, or much further back, Homer, the great Greek author and poet of The Illiad; the fictional cartoon character, Homer Simpson, is not readily associated with wisdom. His mental alertness is quite the opposite. (Attributing that, along with his massive pop culture notoriety, it is no wonder there have been few males born named 'Homer' since the animated family's 1987 television debut.)

However, there is a moment where he spouted something quite profound on an episode of THE SIMPSON'S I will always remember. It is an episode in season 2 called 'Dead Putting Society'. To feel better than his well liked neighbor and rival, Ned Flanders,  Homer trains his son, Bart, to win a mini golf tournament against Ned's son, Todd, to so he can feel superior than Ned. When prompted by his wife, Marge, about how serious he's taking Bart's training, he proclaims: 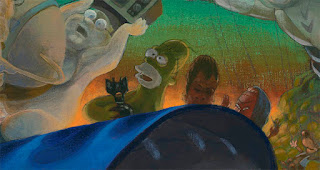 In his moment of fleeting wisdom, he unearthed something fundamentally human: it is empowering to feel better than others. This mindset is still adopted by many today when we disparage someone widely known to behave stupidly in an effort to feel superior and bond with others over the fact that we're not stupid.

Thus, the primary function of cartoon characters is to make us feel better about ourselves. Since cartoon characters don't actually exist, they are permissible and ideal targets of ridicule. This is a form of vicarious living. Seeing characters perform unintelligent acts that would be fun to participate in, without us having to live with compromised egos. (Albeit, if you do take things to the extreme, you can always posthumously earn yourself a Darwin award. An esteem for individuals who inadvertently lose their lives from acts of stupidity.) A cartoon characters actions, however outlandish, are inspired by reality. A reality inhabited by people. People do stupid things, but it's inaccurate to call someone stupid because nobody is stupid 100% of the time. Yet, everyone is inept at something. The idea of combining so many cartoon characters designed for stupor into a united visual felt like something I needed to tackle. In the world we reside in today, the theme seems increasingly relevant. 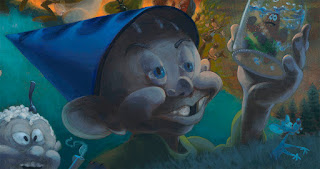 The word imbecile belongs to a classification system of grading intelligence. On the scale, the word ranks second last. 'Idiot' being the lowest possible entry. A new born baby, with it's insufficient comprehension, is technically an idiot by this measure. These classifications have become derogatory over time. The offense occurs when you feel authorized to treat people immorally who fit into lower cognitive levels than you. I remember having a conversation with my Mother, who works with special needs children, if she thought the Disney Dwarf, Dopey, was an exploitation on the mentally challenged community. (His very name - the only one he's ever referred to - is pejorative.)  Individuals in this demographic certainly do not exist for the objective as comedic marks, but such an idea would have been more permissible during the film's contemporary release.

As we can see in the image, the characters are marching along towards an unknown mecca. In the distance looms a great storm that is making contact with a satellite dish on a perilous hilltop. The satellite dish represents the global reach of the internet and how frequently, the most widely shared content is delegated to the realm of stupor.  Solemn empathy does not enjoy the same scalable growth on the internet the way trivial videos of dancing cats do. Is that stupidity, displaced priorities, or both? 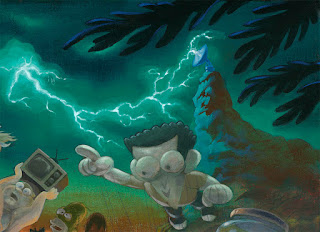 A cartoon character's itinerary offer us instant gratification because their actions don't require explaining. We have the ability to think and exist in a world of increasing complexity. Perhaps we're searching for things to be simpler so we don't exhaust ourselves. Our cognitive energy is finite and must be recovered. Enjoying "stupid" material allows us to not expend so much of it and feel superior in the process.

A 'messiah' of sorts accompanies this cartoon formation via a parade balloon modeled after the mascot from the popular 'FOR DUMMIES' book series which simplify innumerable topics. Each character has also brought along an object with them on this trek to serve their disposition. (Some notable props include a hydrogen bomb, an old television, a protest sign forbidding thinking and a whoopee cushion.) As they march en masse, I'm reminded of a quote by mastermind comedian, George Carlin:

"Never underestimate the power of stupid people in large groups." 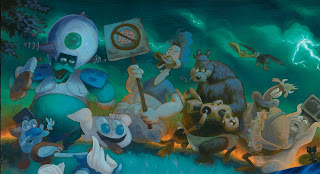 I am a painter and what that means is I create images predominantly using the medium of paint. The objective of an image is to make you remember that you have seen it. If this image has communicated with another human, that is a success. I spend a large portion of my time trying to comprehend human nature. There is lots I still don't understand, but my bewilderment in the matter has provided me with an endless stream of ideas for paintings. Either way, the march continues. Now if you'll excuse me, I have a parade to attend to. 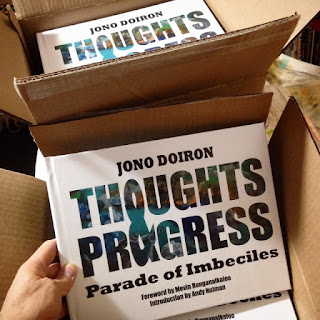 Why not pick up one of the few remaining copies of the book to see the entire process of the painting from start to finish?