Something to look forward to in the new year! VERY excited about this upcoming show I'm curating that will take place in January 2015. 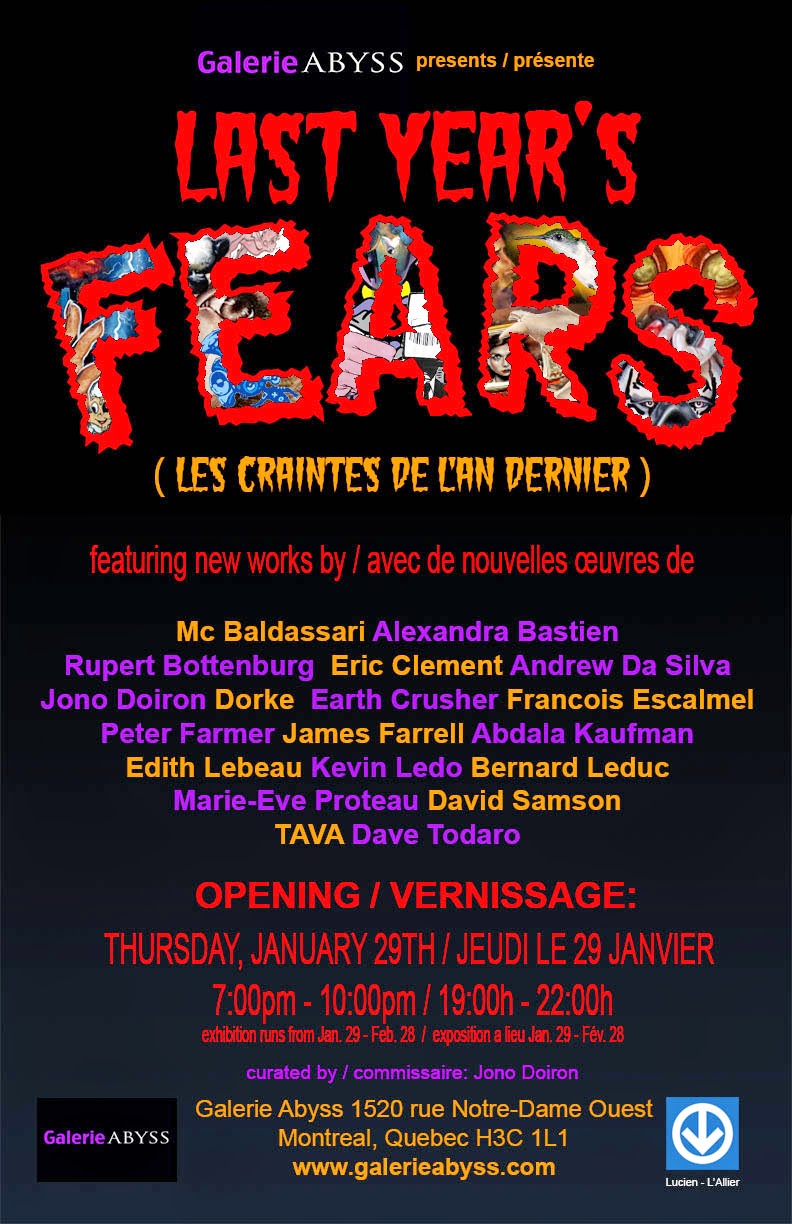 Posted by Jono Doiron at Wednesday, December 10, 2014 No comments:

And the laughter continues...

Hope you all had a great weekend! Here is more development from the 'THAT LAUGH!' painting still in progress... 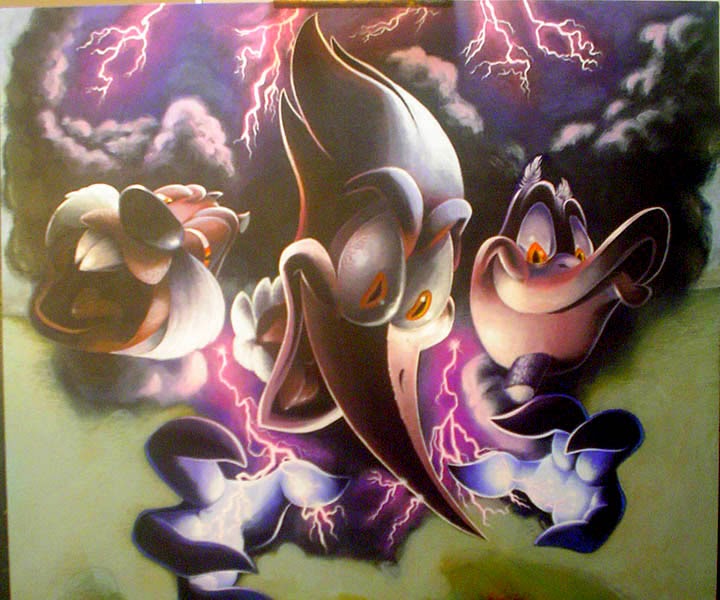 KICKFLIP - exhibit up till end of December 2014

Just a reminder, all the works from KICKFLIP, the skateboard art show at Galerie Abyss, will now be on display until the end of this month. Several of the works are still available. You can also view the whole show online here: www.galerieabyss.com 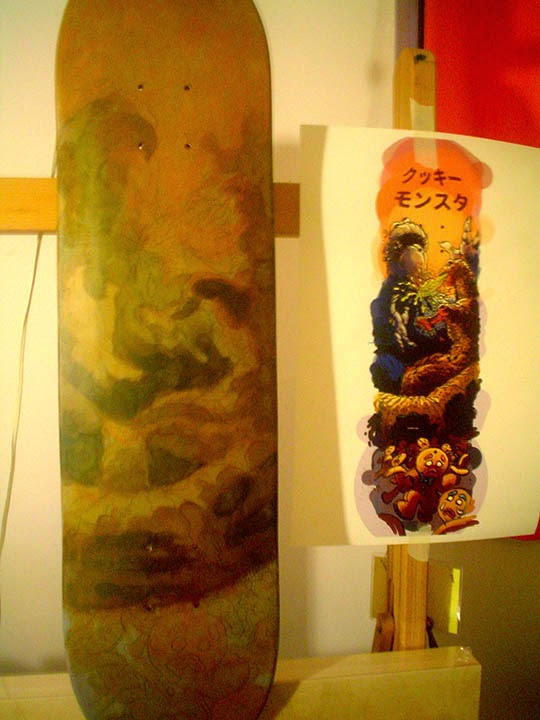 This is a photo I took of the underpainting during the process of the クッキー·モンスター (Cookie Monster) skateboard painting (left) and printed digital color mockup (right).
Posted by Jono Doiron at Friday, December 05, 2014 No comments: 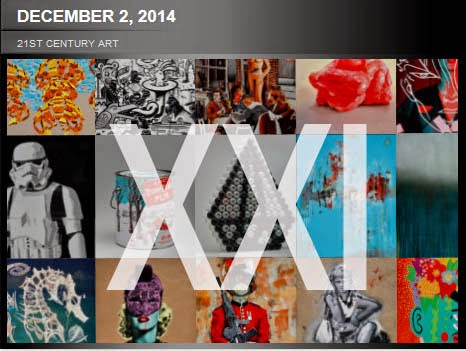 Tomorrow night, I have two works in an auction called 'XXI' (21st Century) at IEGOR, international auction house, featuring only contemporary works. You can join us and 'get your bid on', or check out all the available works from the show by clicking the image above.

Also, I'm sending out a new newsletter tomorrow. If you want updates before anyone else, you can sign up here: http://bit.ly/1vauKPv

Thanks so much everyone who took the time to suggest their favorite cookies (from a  facebook post back in October) for the Cookie Monster painting that's now finished and on display in KICKFLIP at Galerie Abyss. I thought it would be fun to show you where the suggestions went and all the hidden cookies inside the painting. Enjoy with a glass of milk. 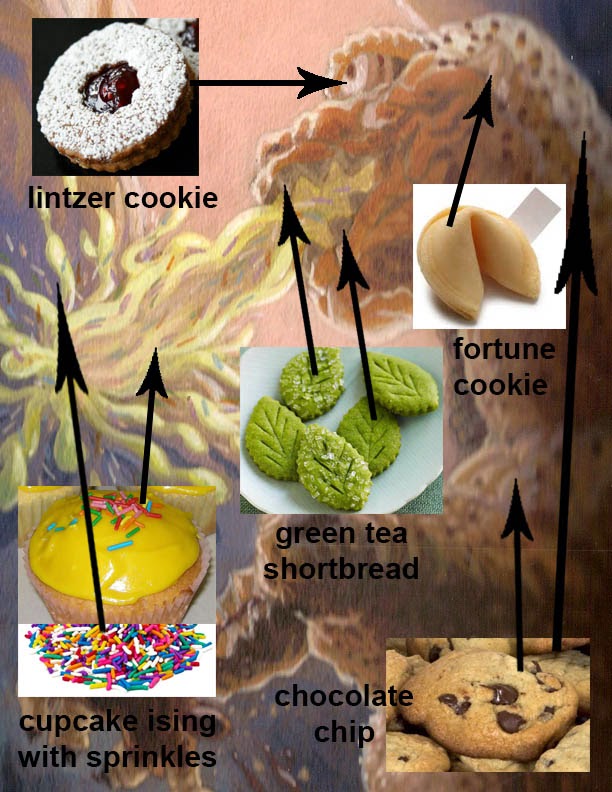 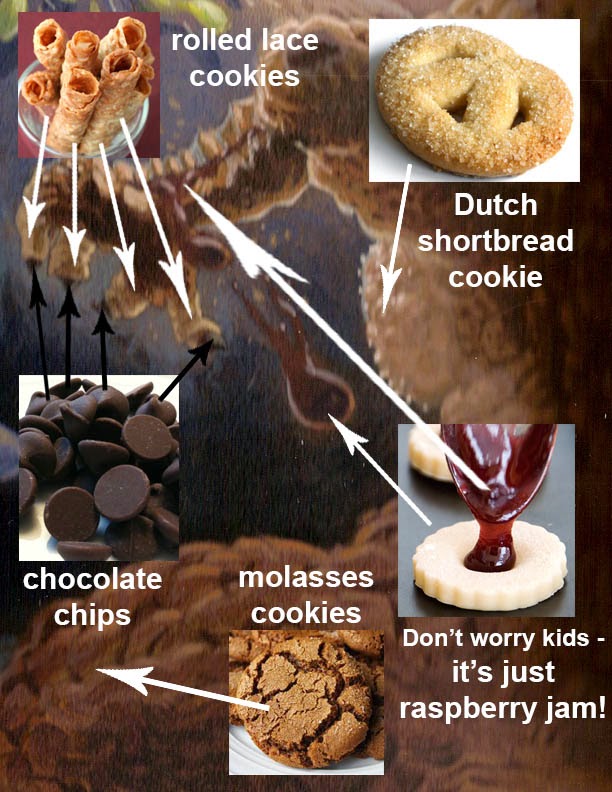 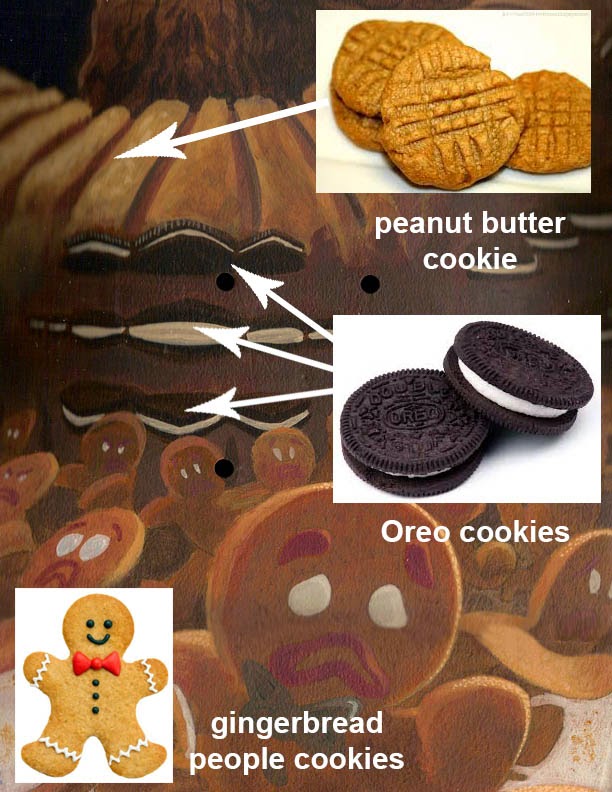 So here is the final skateboard painting I created for the show KICKFLIP (show runs till mid January): http://on.fb.me/1t6X0fS
In this painting, the Cookie Monster fights ANOTHER cookie monster - a Godzilla made entirely out of cookies! 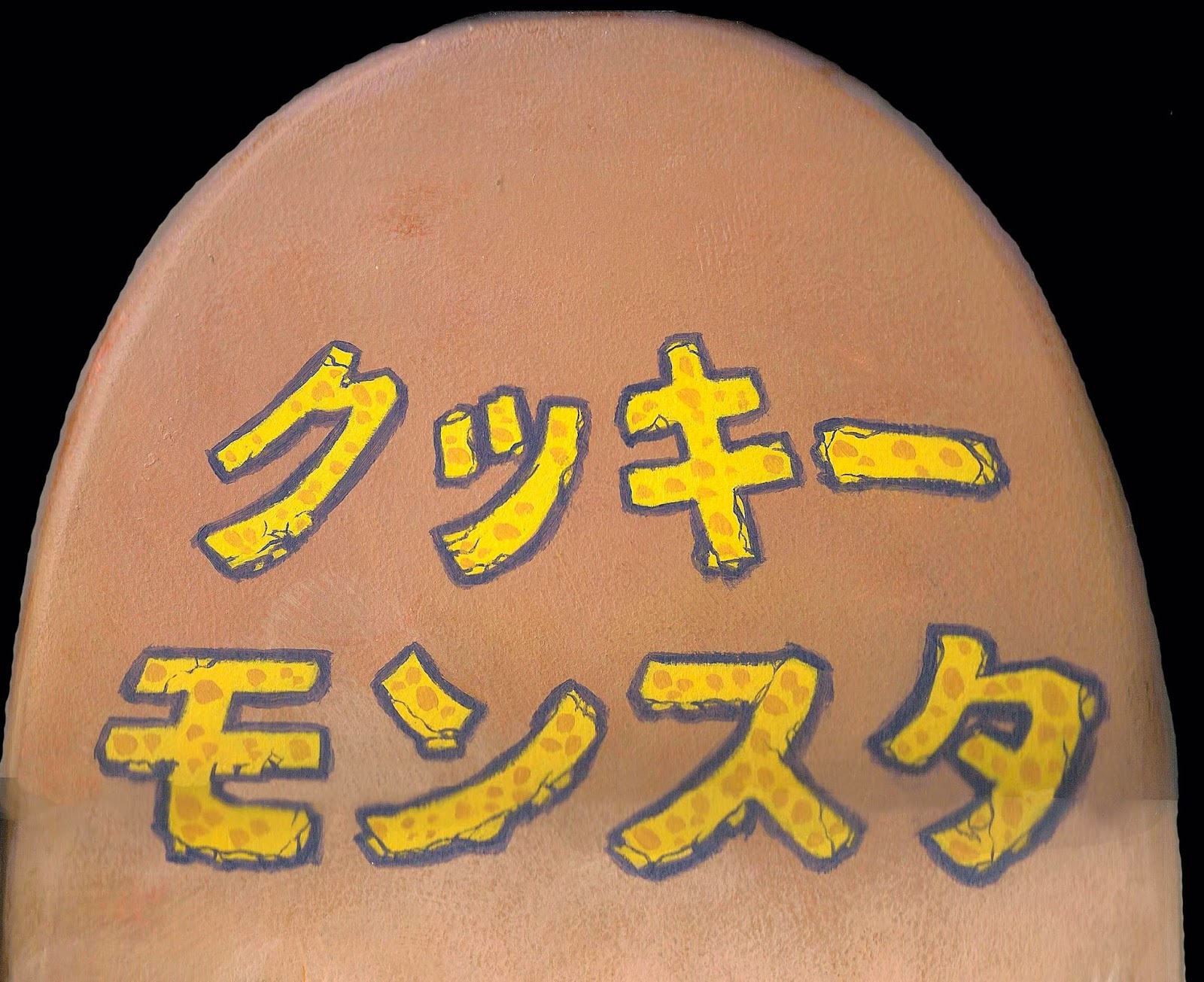 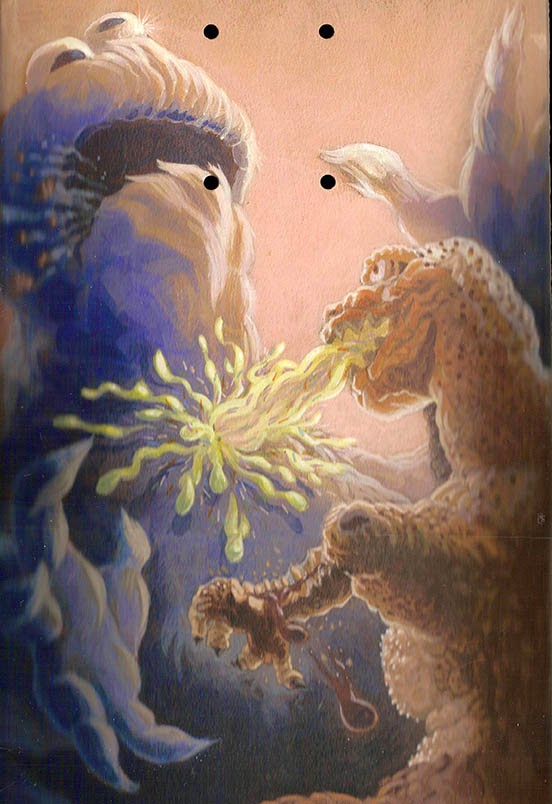 I'll make a future post about all cookie types the Godzilla character is made up of. He's malicious AND delicious! (Look for it soon.) 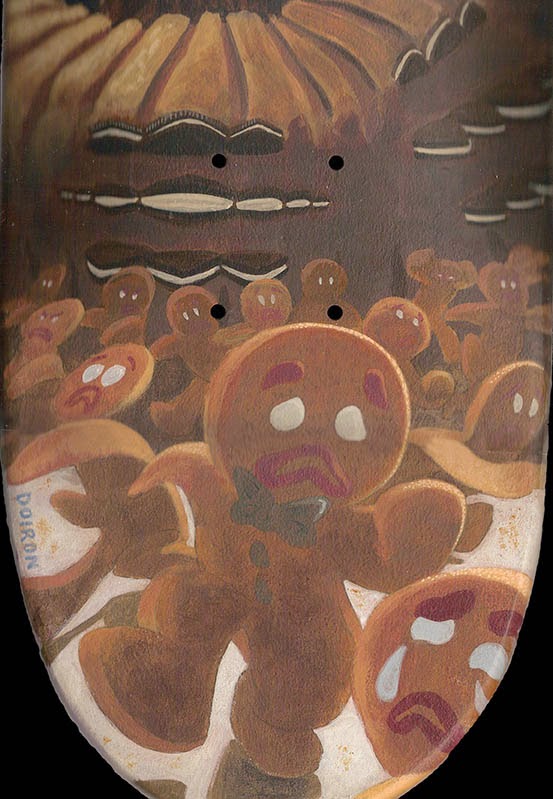 Painting this skateboard for the show made me miss the days spent skateboarding with my friends. It was a big part of my youth.

So here's something I can share with you all now: this past Sunday November 9th, David, one of my best friends growing up, married the woman of his dreams. I was unable to attend the wedding in person in Australia, but I DID send this little doozie half way around the world to the newly wed Star Wars fans. 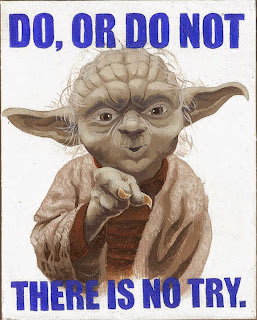 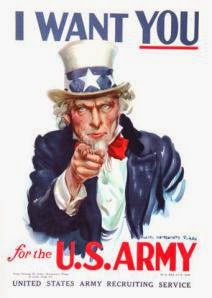 James Mongomery Flagg's famous poster. It has been a VERY popular subject of parody over the years.
Posted by Jono Doiron at Thursday, November 13, 2014 No comments:

I've been concentrating all my efforts on the 'THAT LAUGH!' #painting once again since I finished my piece for the skateboard art show next Saturday. Here is more of the daunting detail: 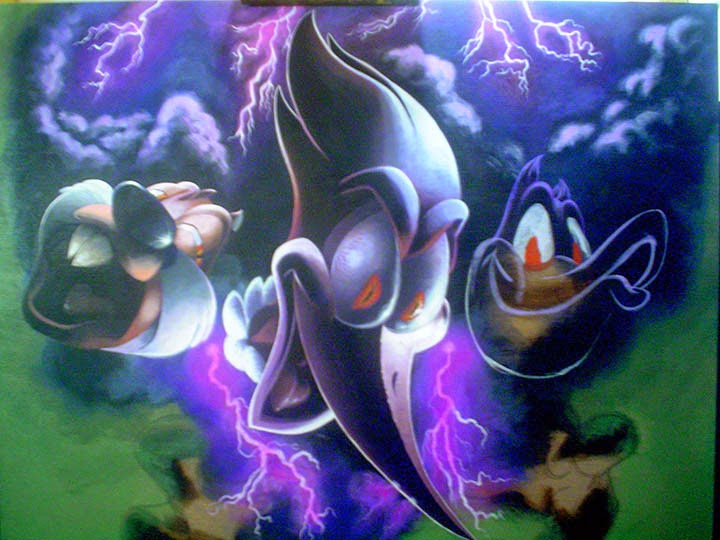 *Please note* There has been a date change of the opening by the organizer, which was previously this coming Friday. Sorry for any inconvenience. 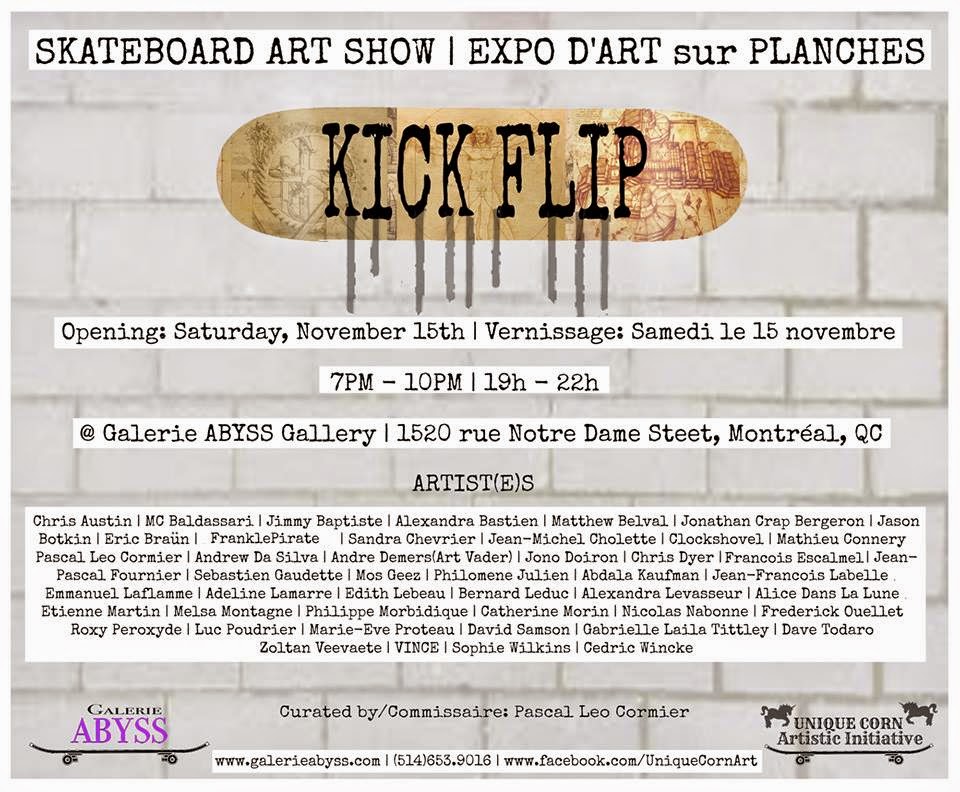 Hope to see you there! Click here for facebook event info.
Posted by Jono Doiron at Monday, November 03, 2014 No comments:

Here is more progress from the cookie painting I'm working on for the upcoming Skateboard show at Galerie Abyss: www.galerieabyss.com 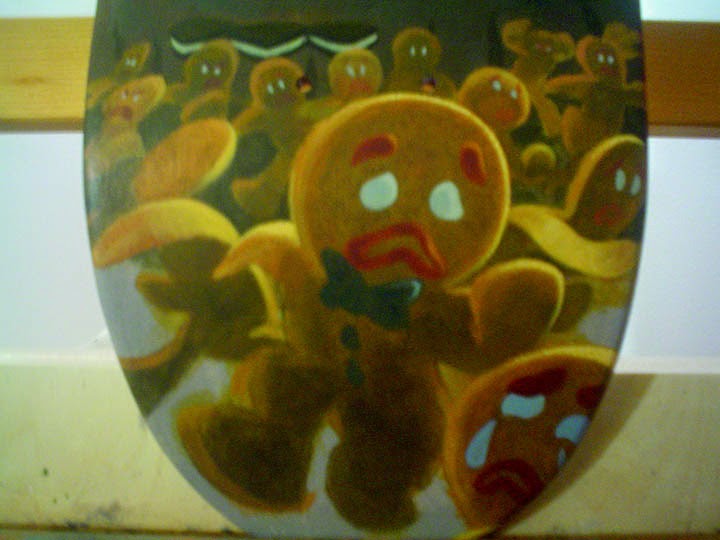 Please note: the opening is on Friday November 7th. In my earlier post I stated it was the 9th - that was an error - it's on the 7th.
Posted by Jono Doiron at Monday, October 20, 2014 No comments:

Color and Light: A Guide for the Realist Painter by James Gurney

I've been learning so much from this book since I bought it 2 months ago. 'Color and Light: A Guide for the Realist Painter' by James Gurney. Excellent comprehensive resource for any painter (regardless of medium) wanting to understand and incorporate more of those two devices into their work. 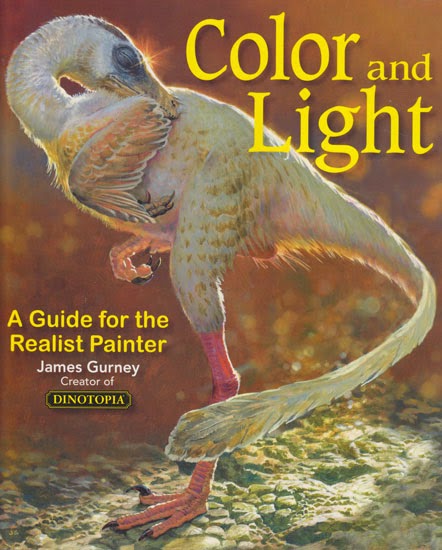 (Available online and in most book stores. If you buy it directly from James Gurney, he'll even sign it for you: http://jamesgurney.com/site/213/color-and-light-a-guide-for-the-realist-painter )

Here is part of the rough drawing for a 'cookie themed painting' I'm working on for an upcoming group show. The final painting (and the rest of the paintings in the exhibition) will all be painted on skateboards! Radical, huh?

The opening is November 9th at Galerie Abyss www.galerieabyss.com Montreal. Hope you can make it! 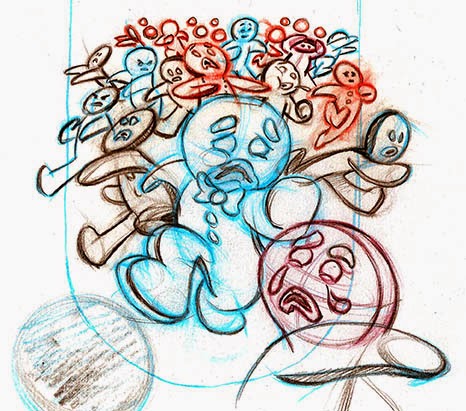 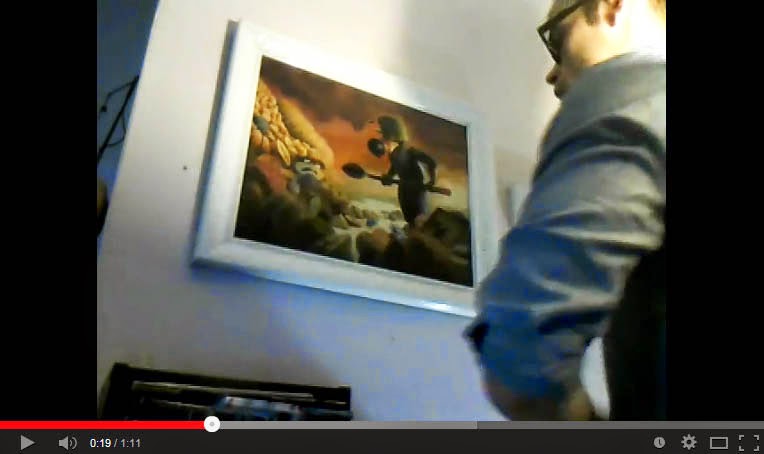 Here's a quick video I made about the making of the painting 'Cereal Siege' and the Thoughts & Progress booklets I sell.  I still have some booklets left... for now.

Also, if you never read the article I wrote about what influenced the painting, here it is again: http://www.jonodoiron.blogspot.ca/2014/07/cereal-siege-essay.html

Posted by Jono Doiron at Monday, September 29, 2014 No comments:

I've been simultaneously taking a course at Syn Studio ('Foundations of Painting' taught by Illustrator and fine artist, Charles Vinh) that just ended last night. What a great experience! Charles taught me new techniques to block in my paintings that I plan to use on future works. Here are the 3 paintings from the 10 week course (including my first painting from a live model). 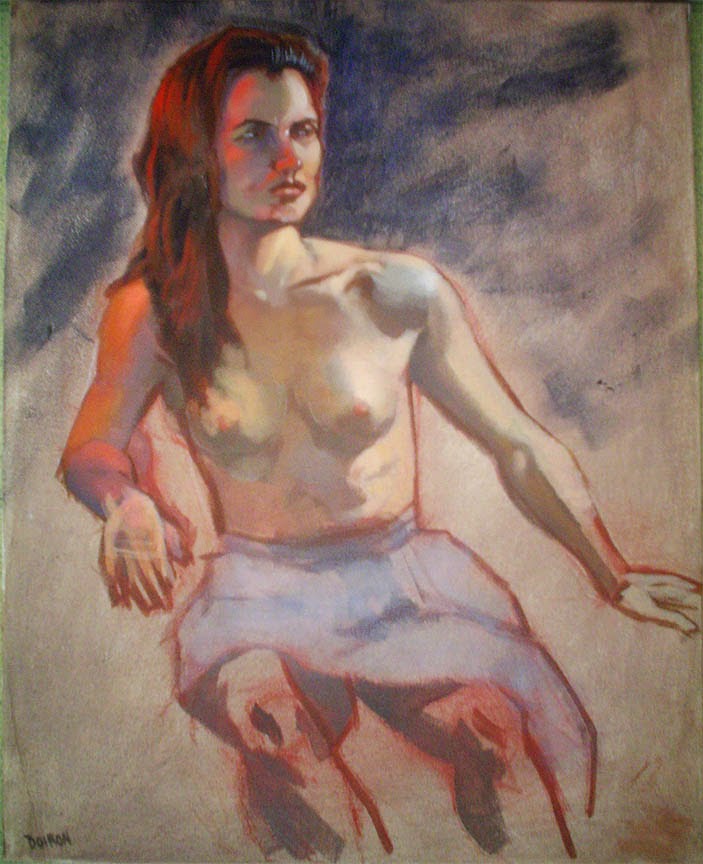 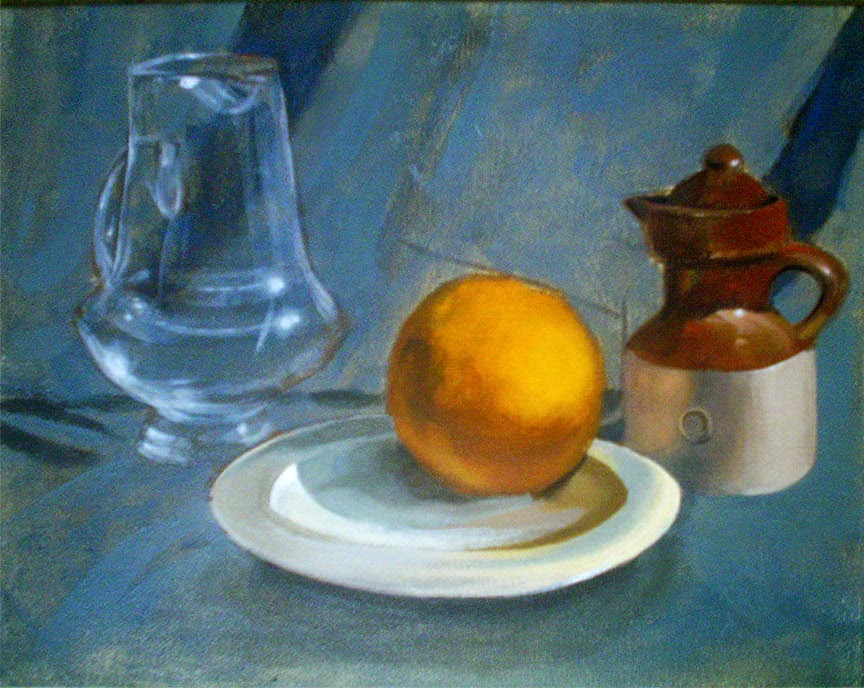 Study of reflective lighting and glass. 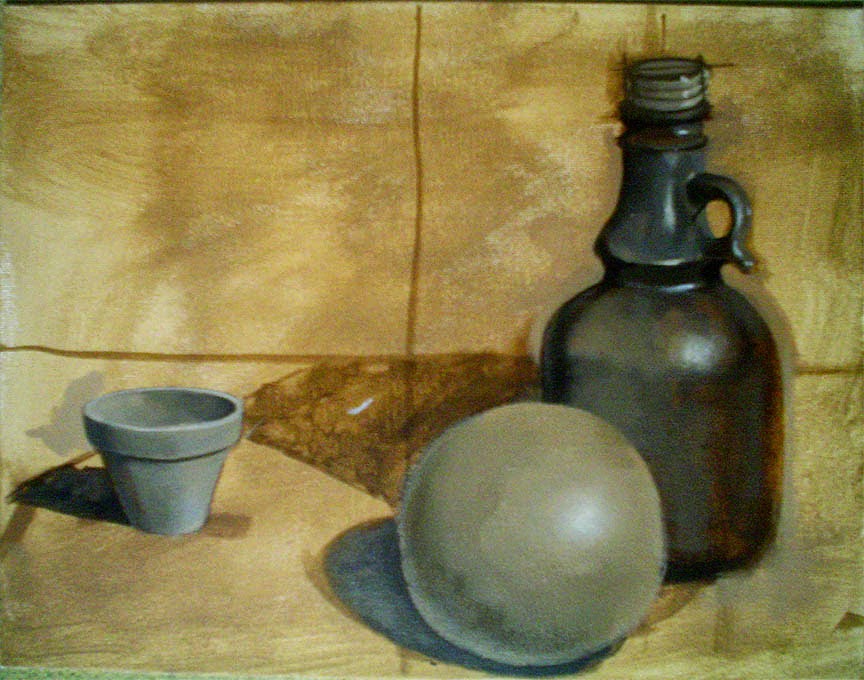 Also, this Thursday is their end of semester Vernissage party! (Among the best art parties in Montreal!) All are welcome! Details here: https://www.facebook.com/events/1466582983612253/
Check out the video below from thier most recent vernissage (June 2014)

Posted by Jono Doiron at Monday, September 22, 2014 No comments: 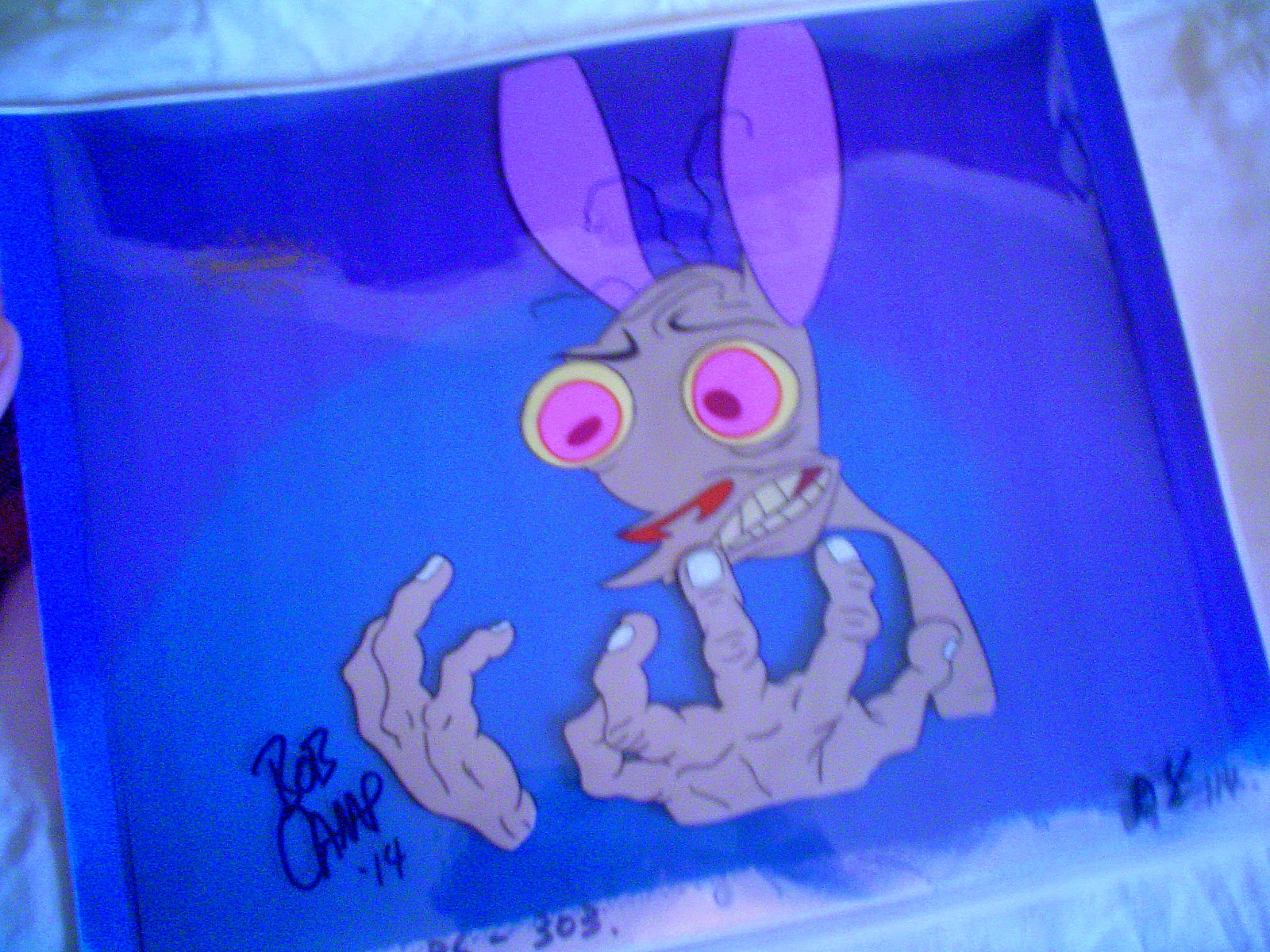 I've ALWASYS wanted to own an animation cel - and now I do! This past weekend at the MontrealComic-Con, I had the pleasure of meeting Bob Camp: Co-Creator and Creative Director on the Ren & Stimpy Show  (among many other animated projects he has contributed his talent to).  Bob was a true gentlemen, quite willing to share his enthusiasm from the show to myself and other fans. Among them, he disclosed an interesting story behind my favorite R &S episode, 'Haunted House'.

The cel I purchased is from the episode 'Stimpy's Fan Club' from the second season. I recognized where the cel was from immediately. Bob (and the woman he shared his table with whom I gather to be his wife or partner) expressed they both secretly wanted to keep it. I assured them it was going to someone who will very genuinely enjoy it.

In the episode, Ren's jealousy of Stimpy's fan letters (and suppression after Stimpy recruits him to reply to his letters) drives him toward madness while Stimpy sleeps soundly. The scene is dark and reminiscent of (and quite possibly influenced by) Macbeth's monologue after killing King Duncan from Shakespeare's play: Macbeth. 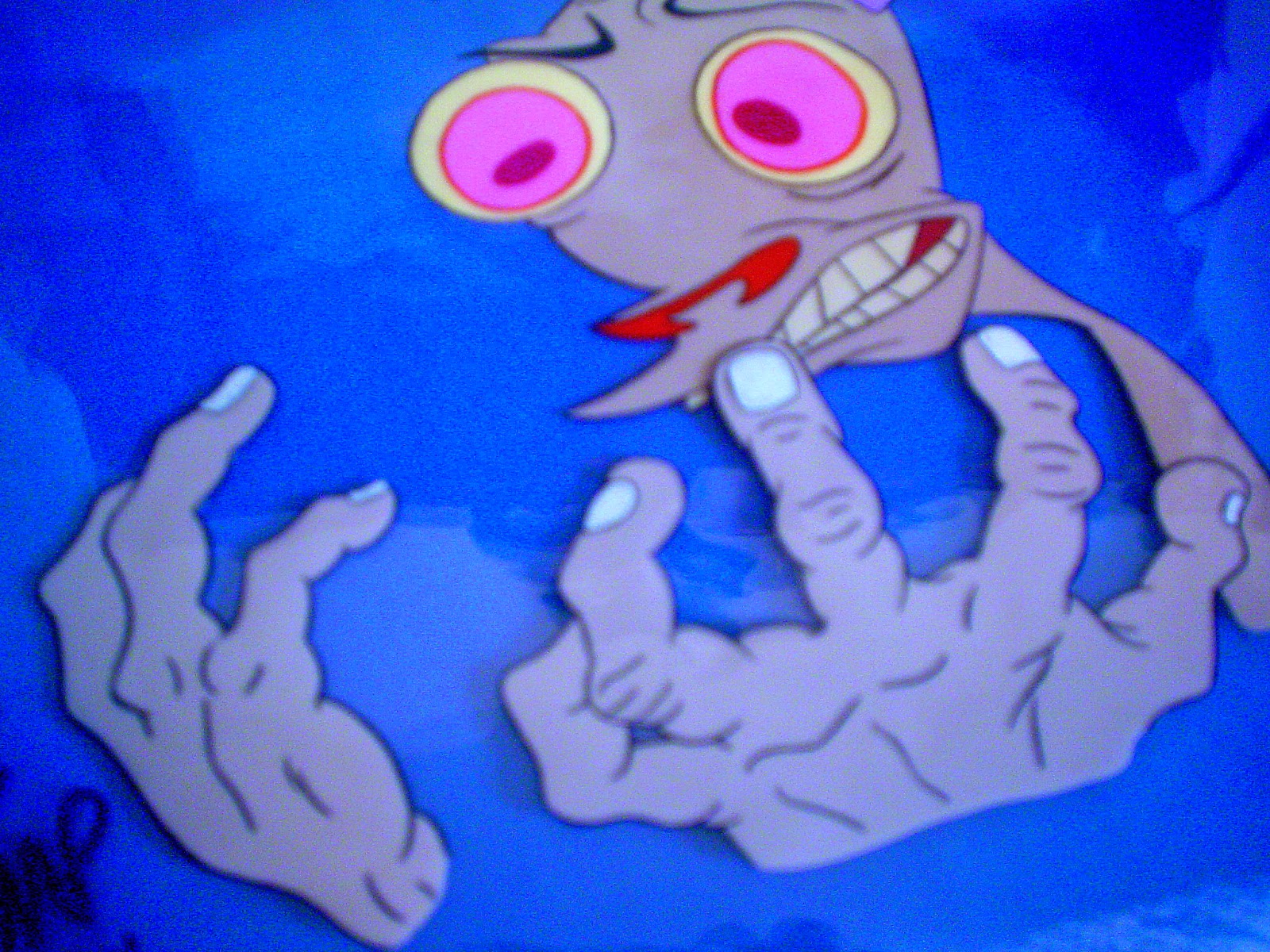 The Ren & Stimpy Show was noted for it's off model continuity. Ren briefly has five digit anatomical hands for emphasis. The line is: "With these hands..." 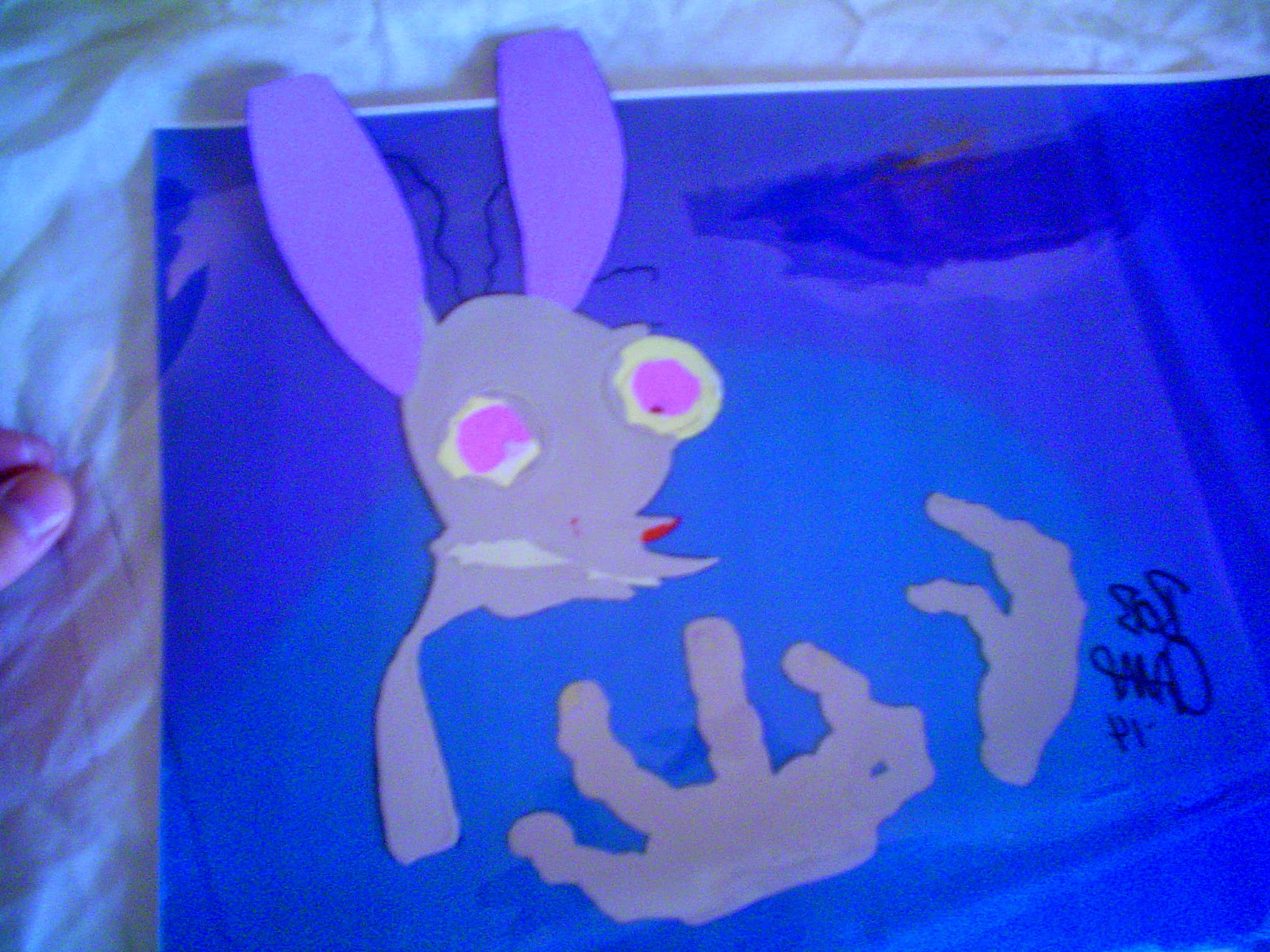 The back of the cel. On cels,  the character outlines were traced or printed on the front and painted on the back (so you wouldn't see brush strokes). This is actually a two cel setup - Ren's hands and body are on two separate layers. The background is a colored photocopy, not the original painted background. 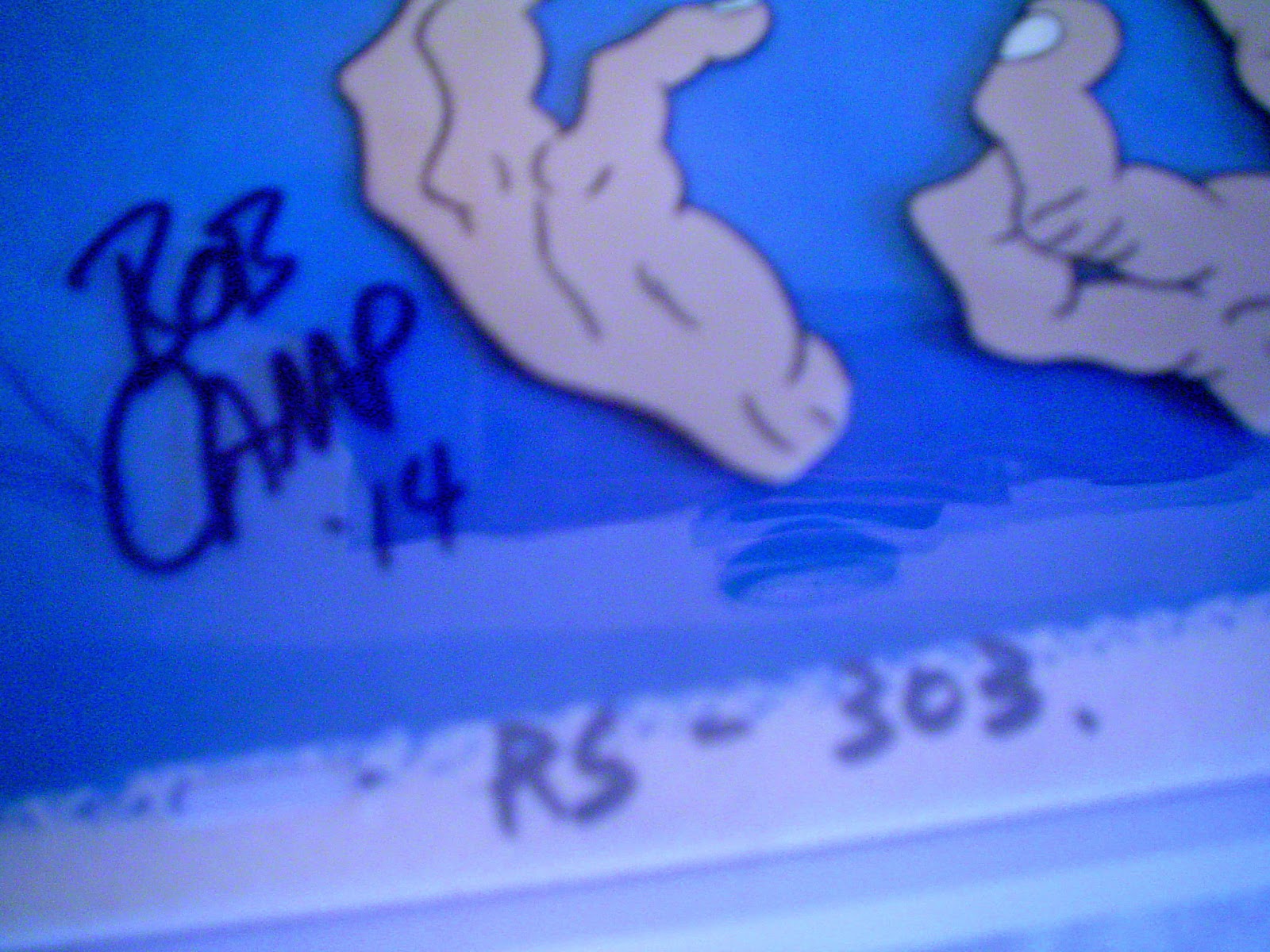 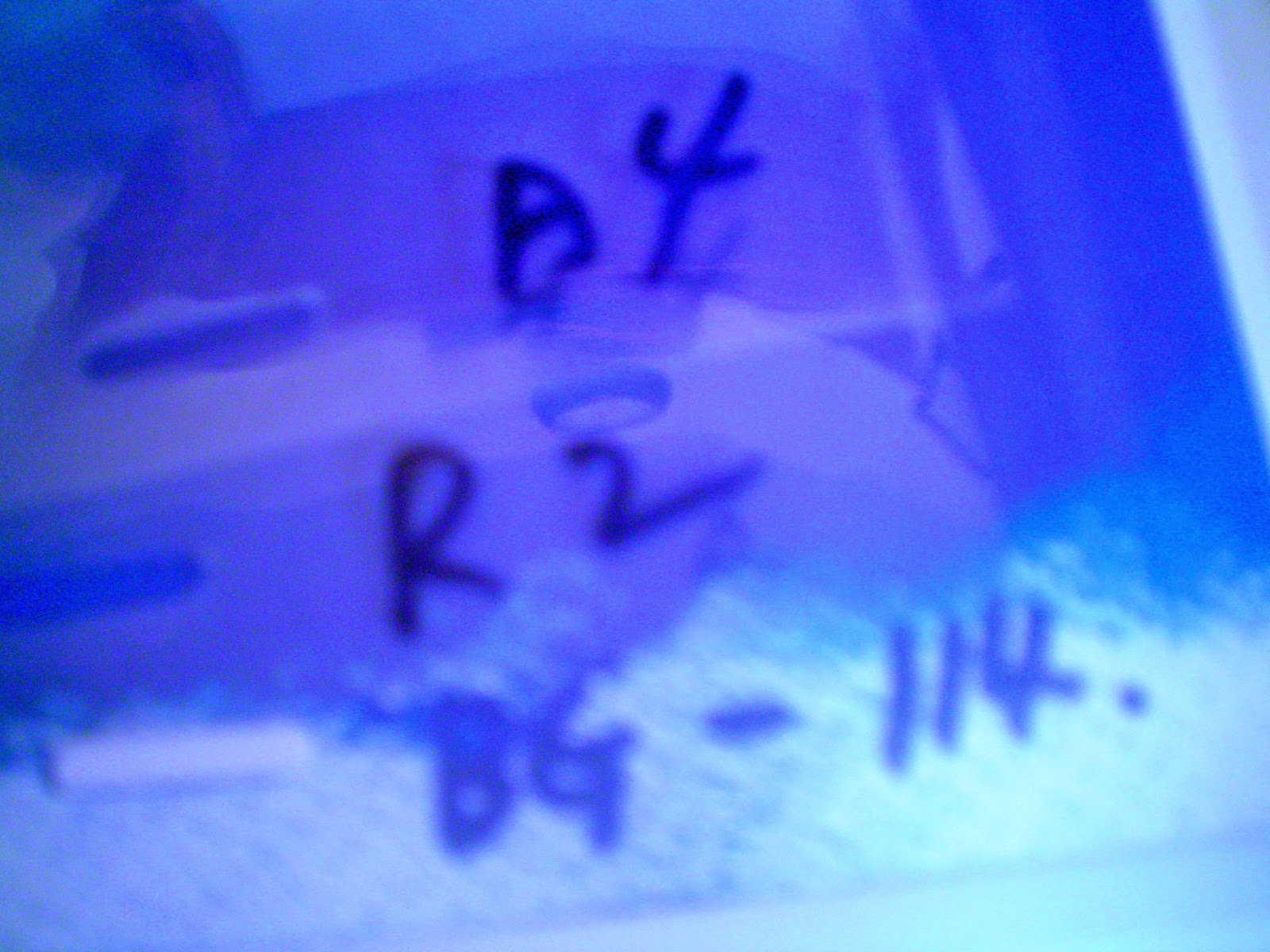 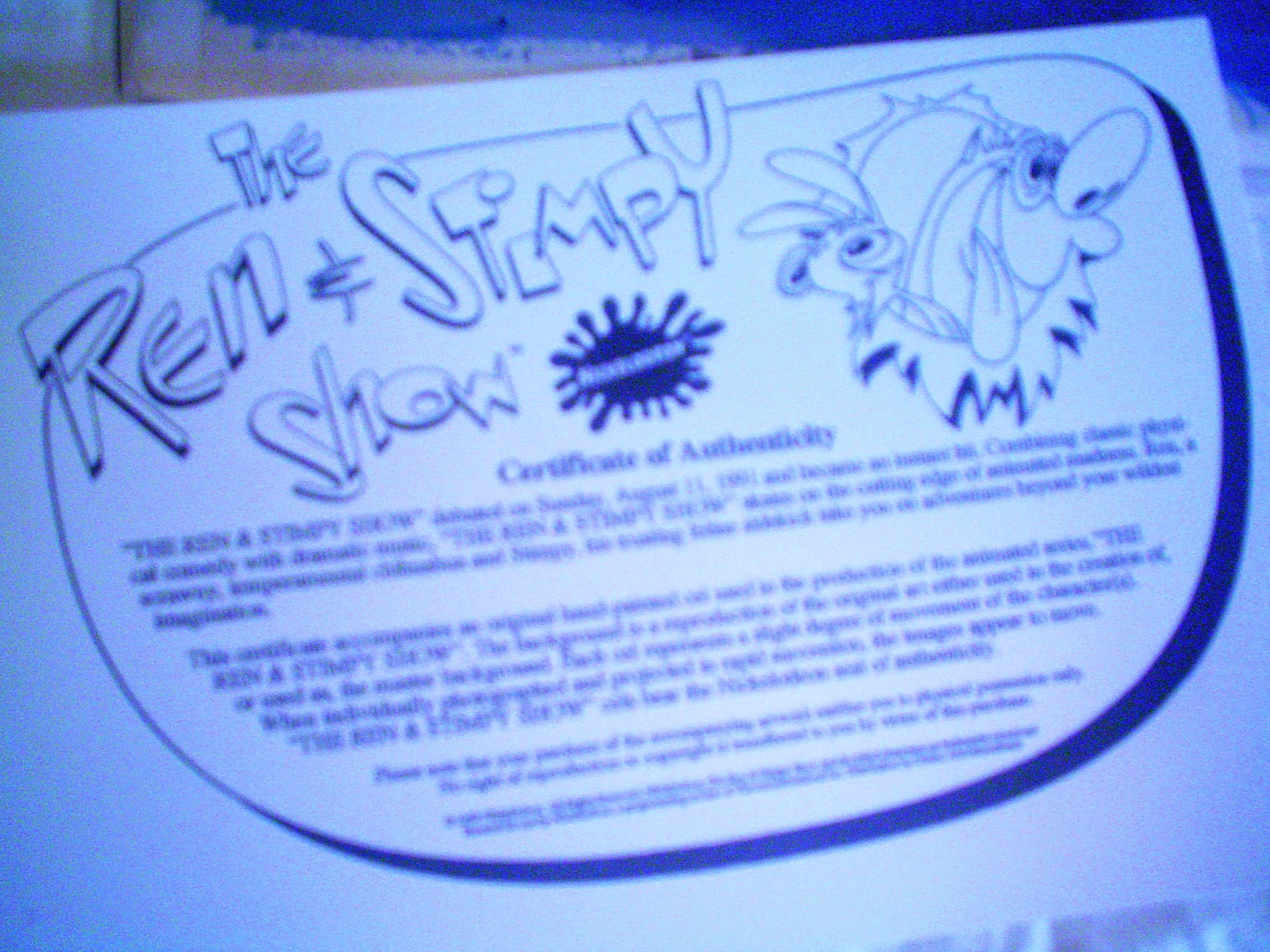 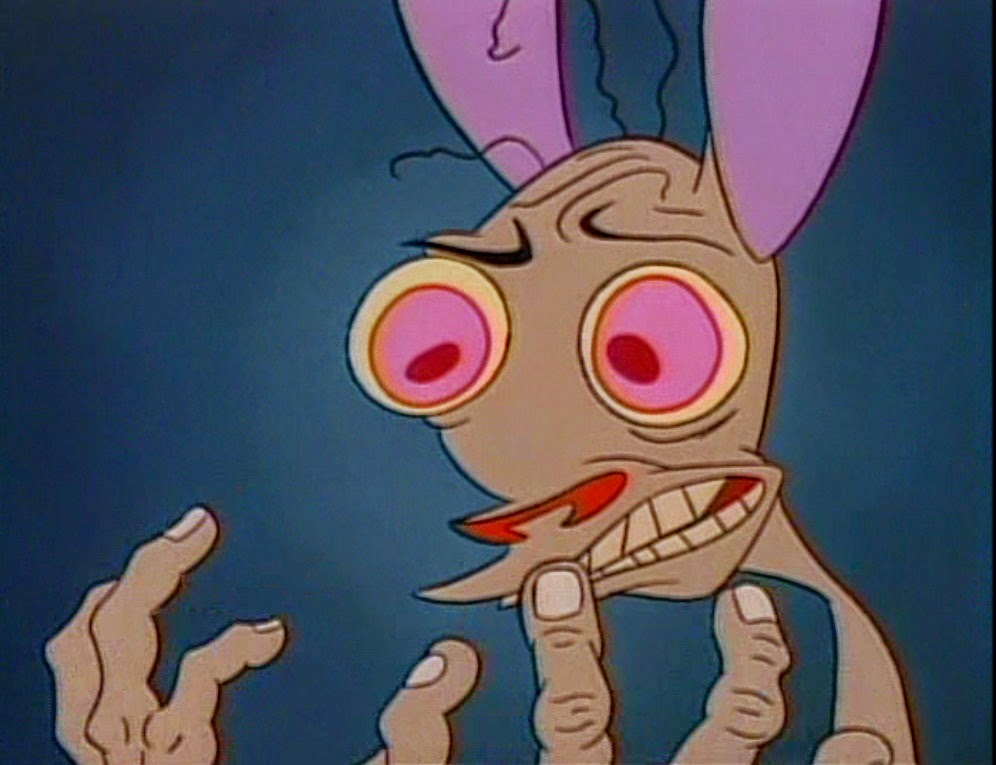 The exact frame I now proudly own as it was shot and broadcast. On the DVD, the frame occurs 13 minutes into the episode.