Till The End - the reveal

So here at last - in it's entirety - is the final acrylic painting 'Till The End'. If you made it to The Artist Project art fair in Toronto, you would have gotten to see this piece in person. Of all the original works in my booth - this one was by far the most popular painting. 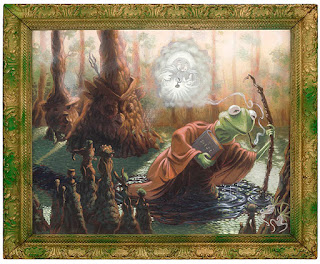 The idea for this painting was inspired by a documentary I saw about the ecosystem Big Cypress National Preserve ('Big Cypress Swamp: The Western Everglades', 2009, directed by Elam Stolzfus). Though I have yet to visit in person, it's visuals lingered in my mind as such a mystical place. I wanted to convey that mood as well as nod to the documentary's conservation efforts (it has been declared as a National Preserve since 1974). The painting serves as a cumulative environmental parable.


The central figure is Kermit the frog, (who most closely resembles a Green Tree Frog, a native species of the swamp) is depicted as a sage in the image who has sworn to protect his habitat. I chose a frog because according to National Park Service: "Amphibians tend to be highly sensitive to environmental changes, for that reason scientists often use them to determine the overall health of an area." He holds a book labeled 'nisi' - the Latin word for 'unless'. It is a reference to my favorite Dr. Seuss book, 'The Lorax' (the celestial character appearing in the smoke) and law. In law, a decree nisi, a ruling that will become absolute unless evidence is presented as to why it should not pass prior to a certain date. (https://en.wikipedia.org/wiki/Decree_nisi

The title is borrowed from the Yann Tiersen song of the same name from his 2010 'Dust Lane' album (listen to it while looking at the painting for best impact).