Online art publication, Chaotic Utopian Mag published an interview with me about the themes and influence of my art. Thanks for the kind words! You can read the interview here:
Posted by Jono Doiron at Friday, September 29, 2017 No comments: 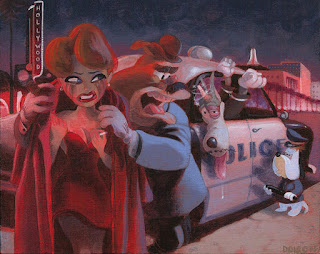 Animation director, Tex Avery (1901-1980), is, has been, and always will be one of my strongest influences. His contribution to the animation art form is undeniable and he is credited as the second most influential animation director, after of course Walt Disney.  His cartoons present a level of hysteria greatly imitated, but yet to be paralleled (in my opinion). Two notable feature films that pay tribute to his legacy are 'Who Framed Roger Rabbit' (1988) and 'The Mask' (1994).

After infusing his brand of humor into the Looney Tunes lexicon at Warner Brothers, he relocated to MGM where he really let loose.  This painting is influenced by some of his cartoons from this period (such as the Wolf & Red cartoons, 'Red Hot Riding Hood' (1943), 'Swing Shift Cinderella' (1945), 'Little Rural Riding Hood' (1949) and also features the characters Droopy and the Cop from 'Who Killed Who?' (1943)). 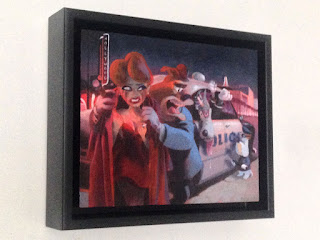 The Wolf (Avery never gave him an official name) and his lustful, ogling, chasing, harassing, kidnapping and overall violations of consent ways, are behavioral traits that will get you arrested in the real world pretty quickly. In the cartoons, the Wolf is the personification of unrestrained lust and here he has met his due consequences. (Sobering, isn't it?*)

To be honest, there was some ambivalence on my end if I should paint this image. I comprehend some women experience harassment on a frequent basis and I'm not insinuating their unwanted receptions are comedic. There are also places in the world where variations of abuse are still not met with any lawful intervention. Yet, I'm compelled to share images that highlight my influences and that doesn't always involve generic paintings locked in an unobtrusive realm. With serious topics, my concern is always the line between addressing and exploiting. How did I do? You tell me. 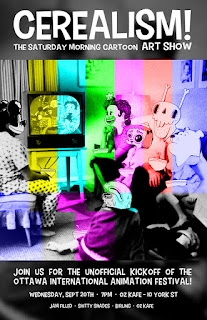 For one week every September, Ottawa, Ontario, Canada, becomes the center of the animation world with the Ottawa InternationalAnimation Festival (this year, September 20-24). The painting is for an art show unofficially aligned with the festival, celebrating Saturday morning cartoons and animation love! Big thanks to Joel MacKenzie and the team at JamFilled for putting the exhibition together! You can see all the works in person at Oz Kafe starting TONIGHT, Wednesday, September 20th. The show will remain up for a month. Click here for the facebook event info.

'Taming The Wolf'
acrylic on wood panel
10"x8" (image)
11.75"x9.75" (including frame)
$ Look, you work hard and you deserve to celebrate your life with original art that speaks to you. If this painting appeals to your tastes, contact me, and we'll bring it into alignment for you. Acquiring art doesn't have to be complicated.

*Also an Avery reference. In many of his cartoons, he would embed signs that spoke directly to the audience such as: 'Spooky, isn't it?', 'Noisy, isn't it?', 'Exciting, isn't it?'...

Posted by Jono Doiron at Wednesday, September 20, 2017 No comments: 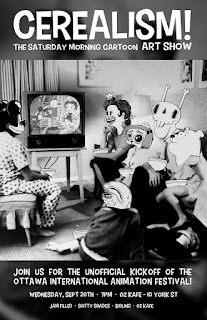 If you live in or will be visiting Ottawa next week, join us for Cerealism - The Saturday Morning Cartoon Art Show! Featuring original works for sale by top animation artists! The event is organized by Jam Filled animation studio and will serve as the unofficial kick off party to the Ottawa International Animation Festival. The opening fun is happening next Wednesday September 20th at Oz Kafe.
Posted by Jono Doiron at Thursday, September 14, 2017 No comments: