Last month, I finally completed a painting I started last year which I had been laboring over in between other projects called: THAT LAUGH! (see previous posts). The painting is about psychological repercussions generated by some of my all time favorite cartoon characters. You can read the full story behind the idea for the painting below:

One of my strongest most undeniable influences is the LooneyTunes. Their madcap hysterics brought about more enjoyment and laughter in me than any other cartoons I can think of.

Daffy Duck from the franchise is my favorite cartoon character of all time. Both his blitz beginnings and conceited conduct arrested my young developing mind. When I discovered Woody Woodpecker afterwards, I enjoyed his early disposition much better: a brash bird with far too much energy. Over time, I found he became heavily gentrified and his cartoons became tamer. Screwy Squirrel is a short lived brain child of one of my heroes, the late great Tex Avery.  Only appearing in five official cartoons and discovered by me while exiting my teens, the character is lesser known to many and has the most abusive antics of the three.

These cartoon characters didn't just make ME laugh - they had prominent laughs themselves! Woody Woodpecker's laugh is indelible - if you've heard it once, you know exactly who it belongs to. Daffy's 'WOO-HOO-HOO-HOO' laugh is manic and memorable. Screwy's laugh is not as renowned - but certainly taunting. The idea of combining the three of them into a homage painting united by their wacky laughter sat in my conscientiousness for over two years before I would begin the painting.

But the laughter these characters generated in their cartoons was always at someone else's expense. 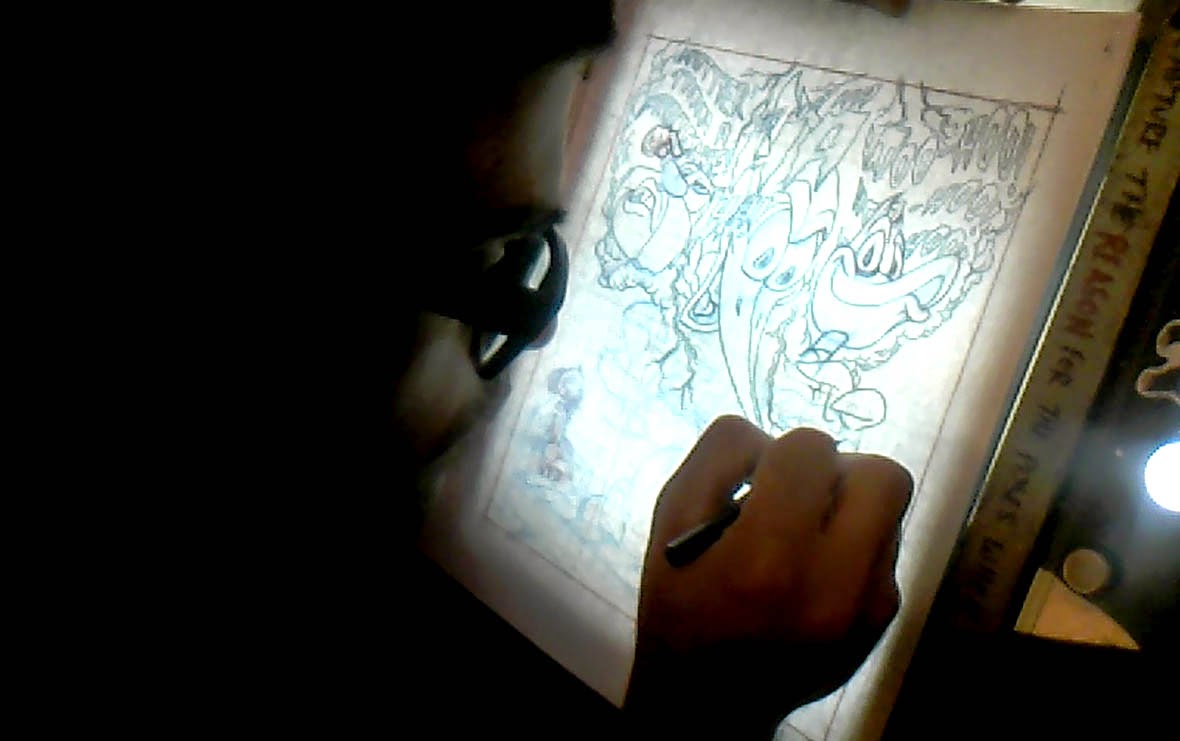 Far later in my development, I realized Daffy Duck, Screwey Squirrell and the early Woody Woodpecker were not just pests - they were bullies.  Each of them exerting a combination of physical, verbal or psychological abuse on their chosen victim the whole time LAUGHING while doing it.

But why do we have such vicarious desires over such disrespectful behavior in the first place? The answer I believe is because cartoon characters exemplify our inner selves. They perform acts we would love to do - but could never get away with. It's important to note, behavioral traits (both good and bad) in cartoons characters are inspired by real people.

As much as I admired Daffy, Screwy and Woody's frantic antics, I developed a sense of sympathy for Porky Pig. In cartoons, he would frequently appear timid, ambivalent and taken advantage of. I also think the act of being bullied, is something generally everyone can relate to. Perhaps on both sides of the spectrum. (Myself, I admit, there are times I wasn't exactly an angel to my sisters growing up .)
Many an animated cartoon would end with a character literally 'going crazy' - in some cases even incarcerated -  by the antics of another.  In the painting, Porky has been driven to the point of madness where he now must seek help from his abuse. The act of confessing maladaptive struggles to a psychiatrist was nothing unfamiliar with me either. Myself, having undergone therapy sessions on two separate occasions before the ripe age of sixteen. 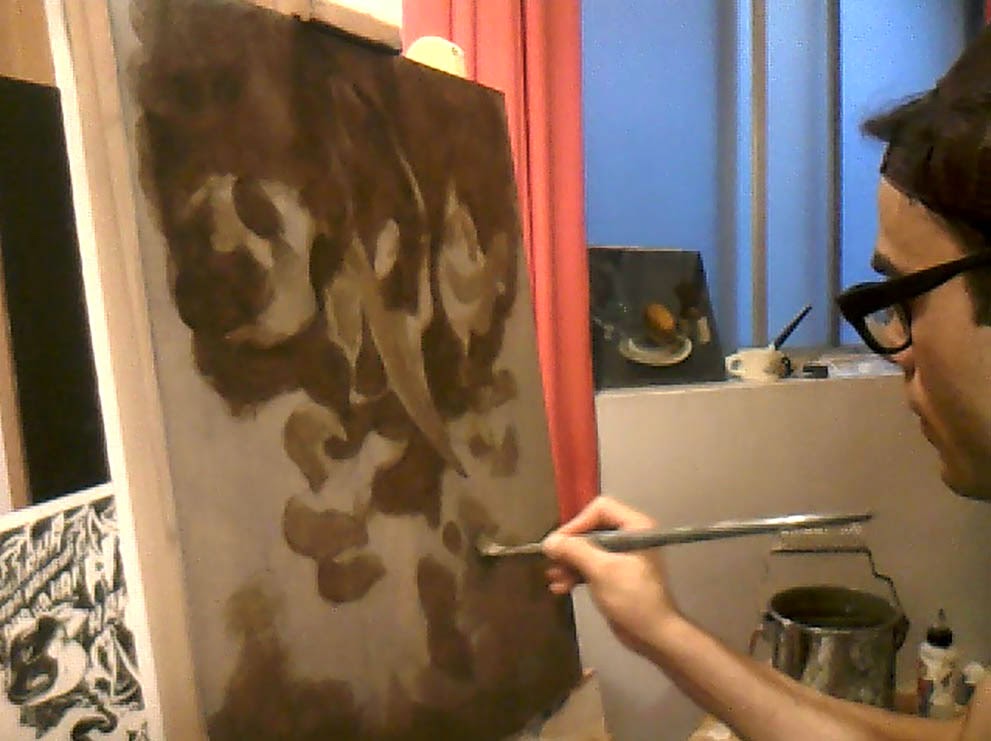 A conversation in late July 2014 with one of my best friends and concept artist, Tony Mitchell, reminded me that pink is the official color of anti-bullying. This sprang from a campaign started by two males while in High School (coincidentally from my province of birth and development, Nova Scotia) who organized a pink shirt wearing rally in support of a younger student bullied on his first day in school for wearing a pink shirt to class. With that information, I thought it would be appropriate to work the color pink into the image somehow. Porky is already  a pale pink - so that worked out conveniently. His three oppressors in the clouds are cast by an eerie pink light and their taunts at full spectrum. Also, Ludwig Von Drake (who plays the psychiatrist in the painting) dons a pink shirt.

I think both cartoons and psychology have interested me because cartoons have influenced the behavior of generations of children in ways no one ever really intended. I've forged not only a sense of desire and empathy for cartoon characters I grew up with, but some of my fondest memories to date. Perhaps there's something very unsettling about that. I've  accumulated real world emotions over characters that don't even exist. There is a part of me that tries to battle the reality of knowing I can never actually meet them. And for me, painting them is an act of spending time with them. 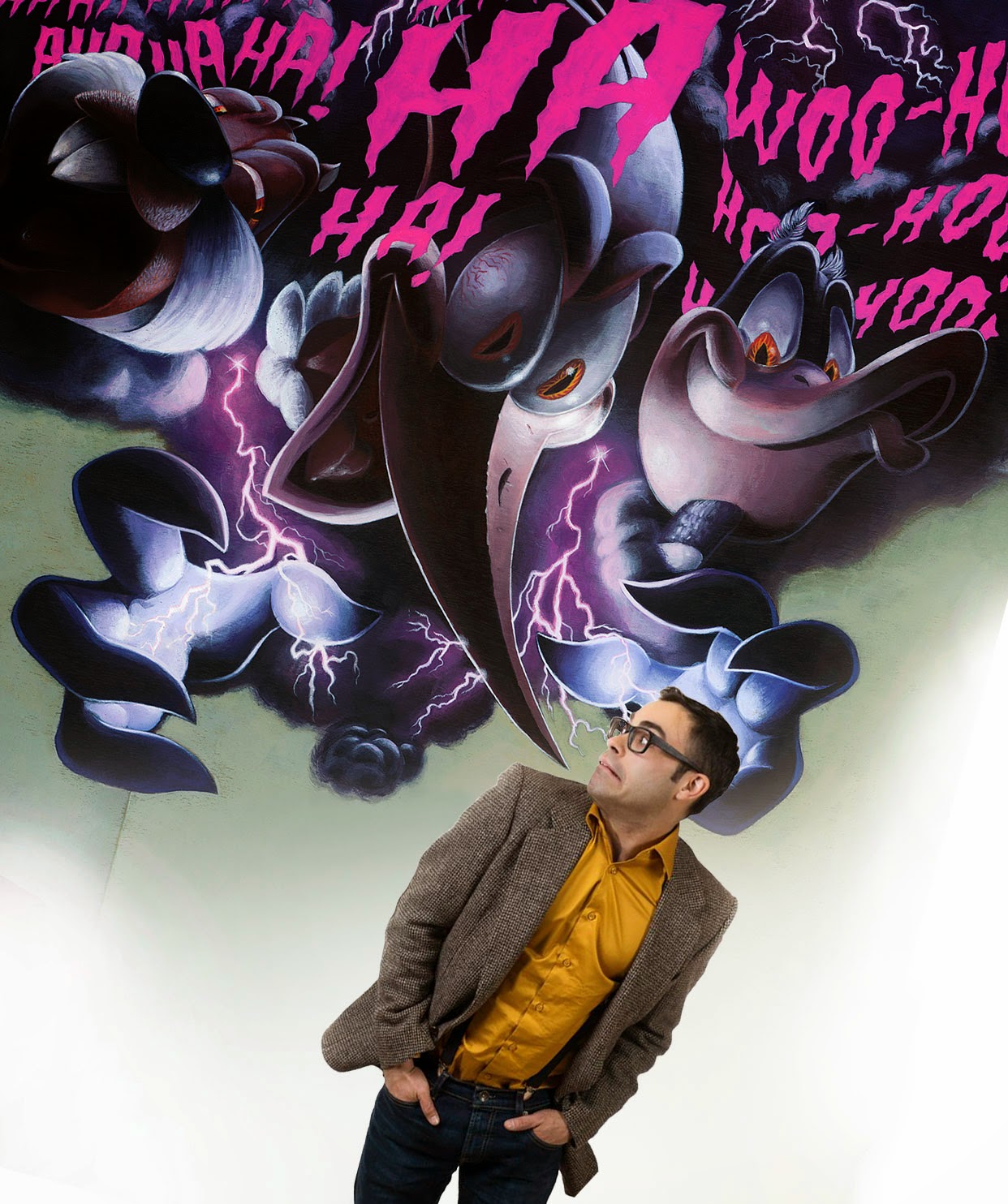 Both the color study and tonal drawing to the painting 'THAT LAUGH!' are now available on my online store. If you would love to own a piece of the development, and an original at an affordable price, this is a great way! https://jonodoironstudio.storenvy.com/ 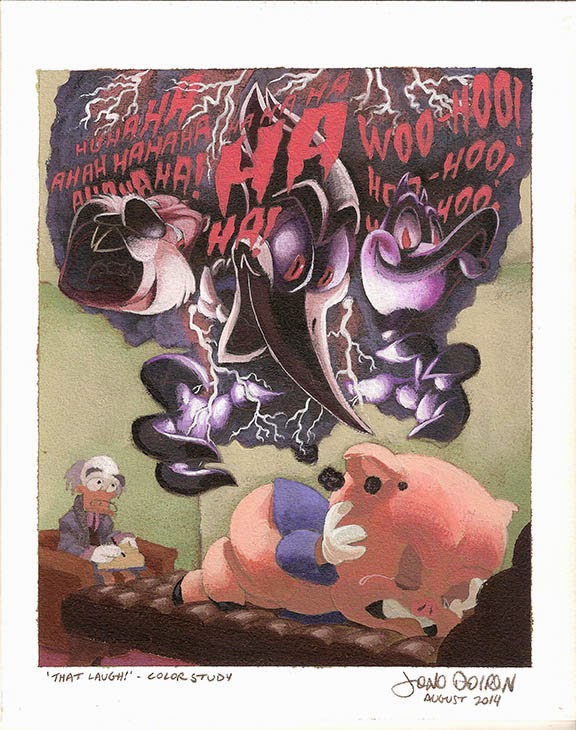 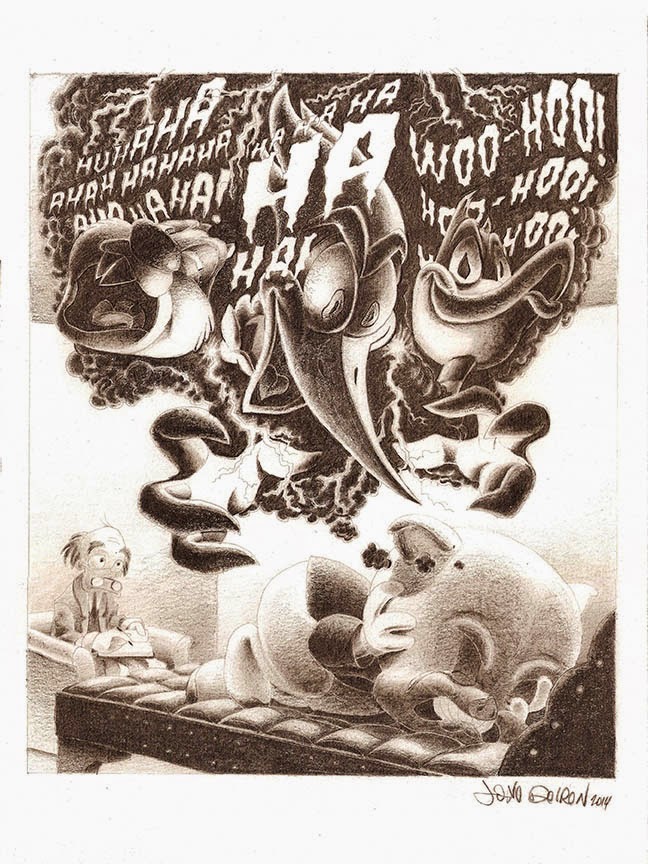 At last - as promised, the final painting 'THAT LAUGH! revealed if you weren't able to see it in person this past weekend at the YES Montreal Art Expo. It's been quiiiiite a journey with this painting! 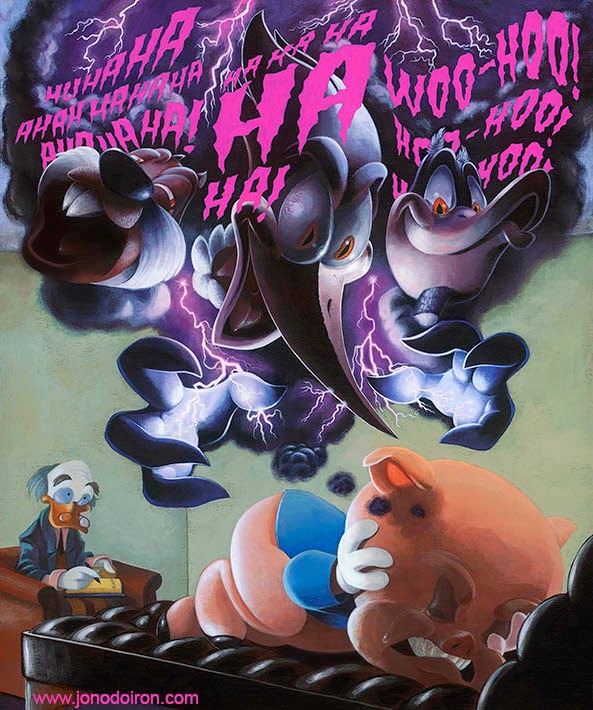 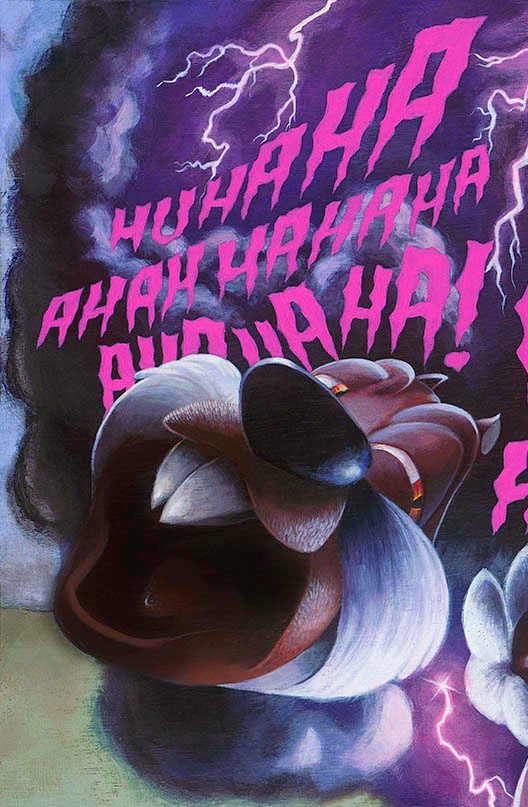 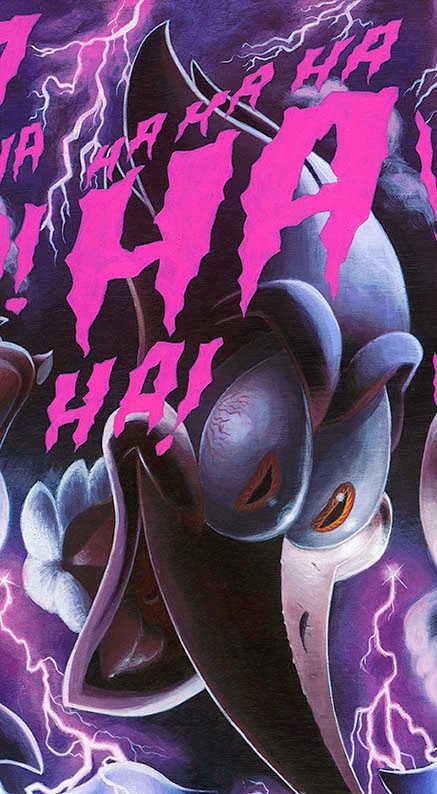 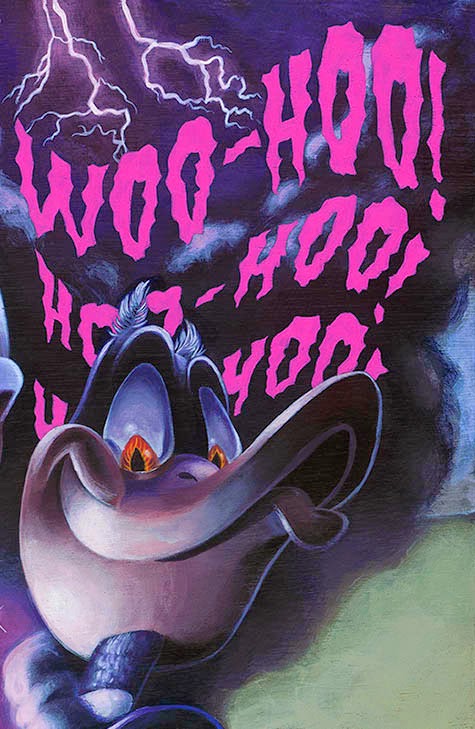 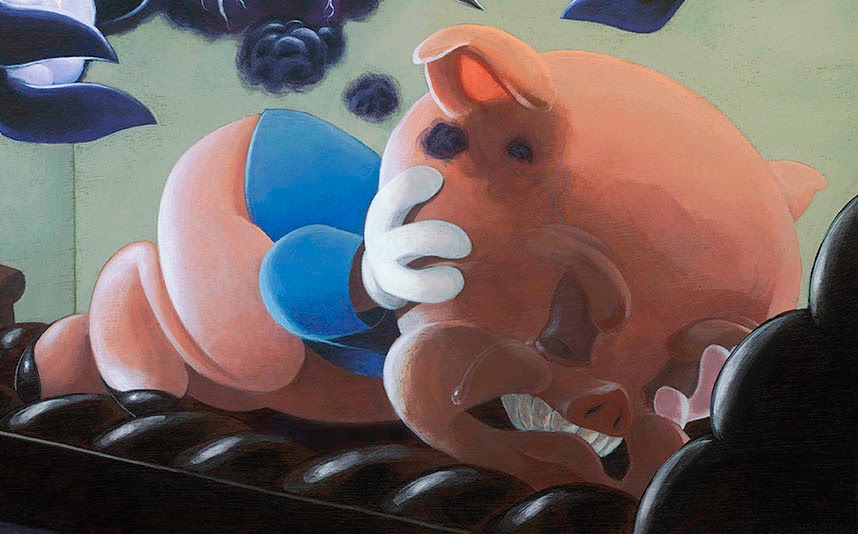 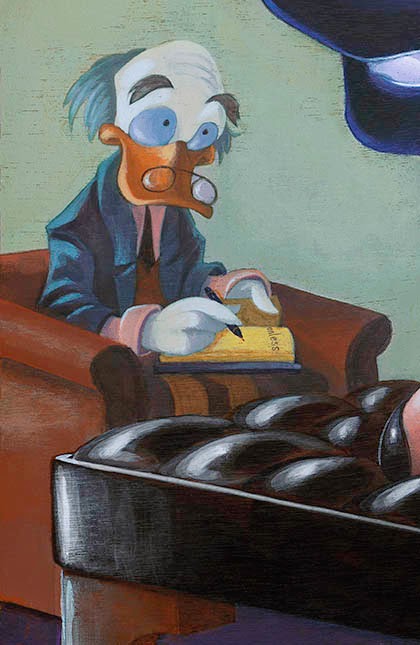 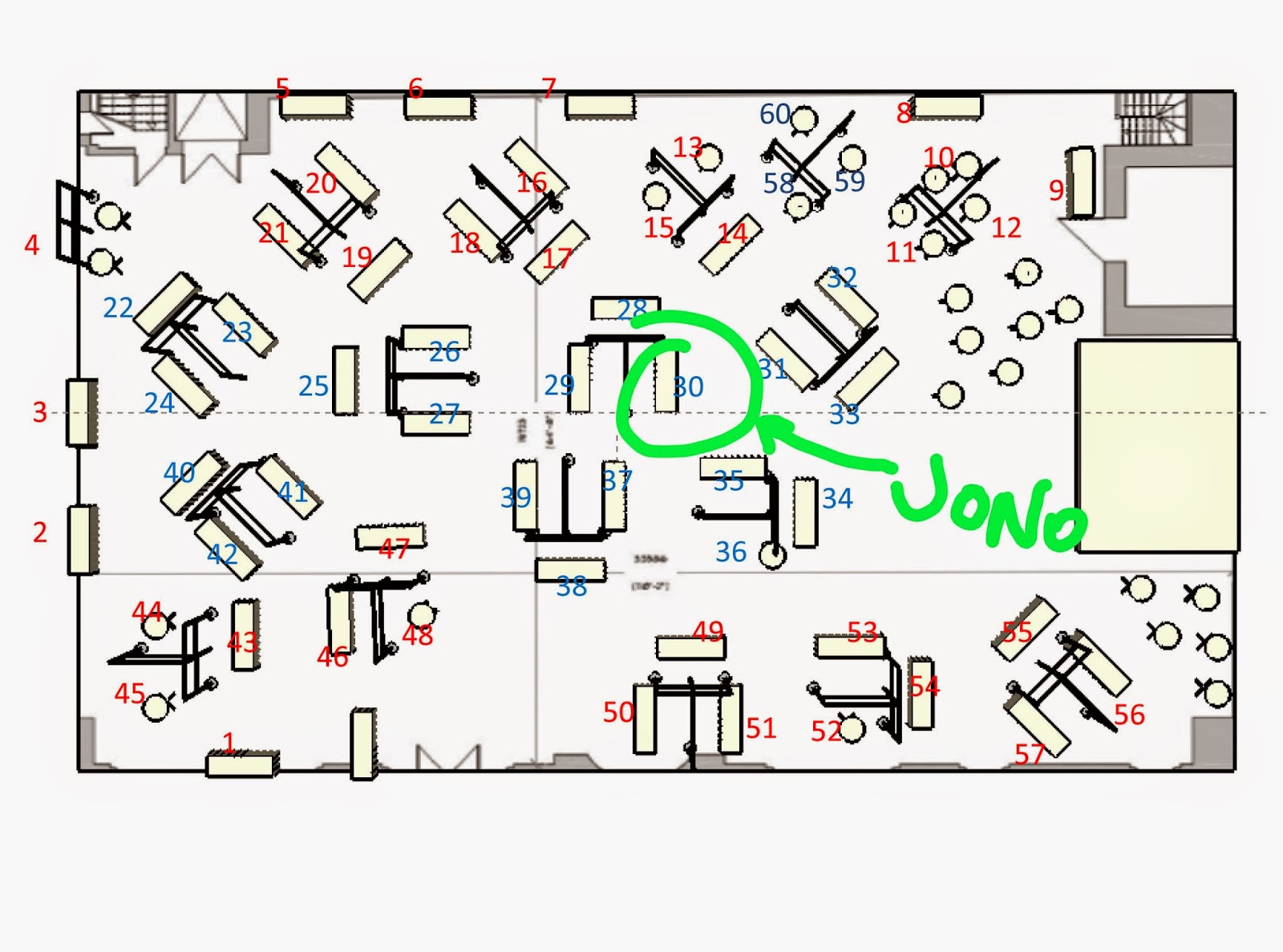 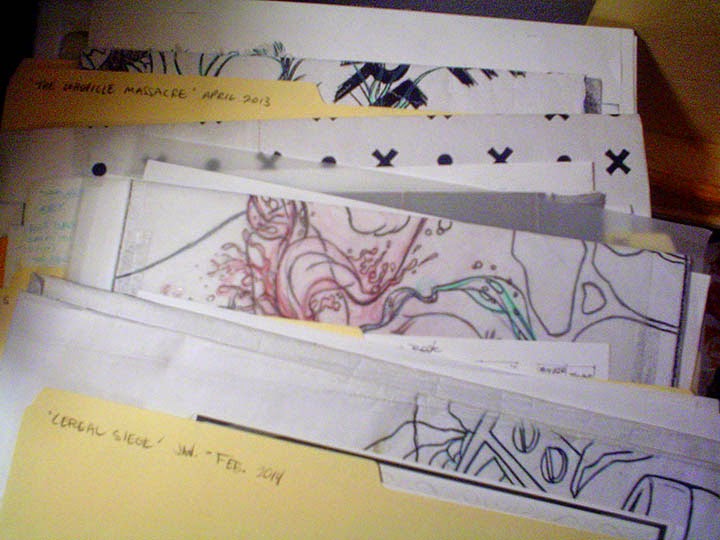 Another reason to attend the YES Art Expo this Friday and Satuday: I will bring along with me some folders containing my development drawings that I will flip through with you and show you my process. (I will have many drawings for sale as well.) I look forward to seeing you there! You can find more info here.

This is an excerpt from my latest painting called 'THAT LAUGH!'. It is a visual feast of terror, laughter and anxiety and I can't wait to show it to you all! Come chat with me at the YES Montreal Art Expo, March 20-21st and to see the painting in person. (I'll post the final painting in it's entirety after the event.) I will have many other works on display and for sale too. http://www.yesmontreal.ca/en/artists/library/1345

So, I'm just adding the finishing touches to the painting 'THAT LAUGH!'. Find out what's so funny when you see the painting at the YES Art Expo March 19-21! Info here: http://www.yesmontreal.ca/en/artists/library/1345 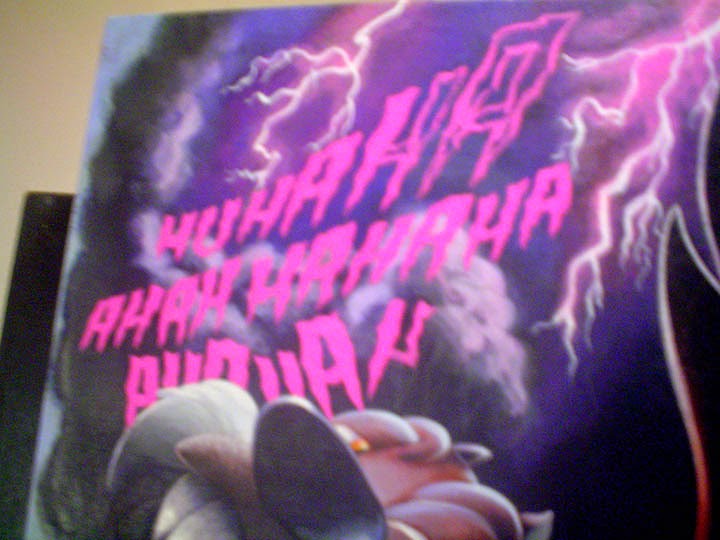 I've been selected to participate in YES Montreal's Art Expo coming up March 19-21! You can expect to see 60 artists from multiple disciplines selling and promoting their work. I will have prints, drawings and paintings to sell and will AT LAST present the COMPLETED painting of 'THAT LAUGH!'. To learn more about the Expo and see the others artists involved, click here: http://www.yesmontreal.ca/en/artists/library/1339