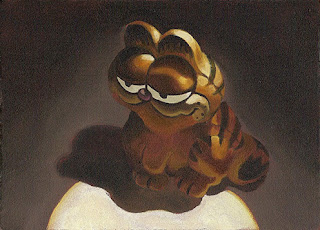 Happy Monday! Know who doesn't like Monday's? ...Well, many people, actually - but especially Garfield! (Despite the fact he has no work, school or volunteer commitments, but I digress.)This is another painting study I did. This time of a Garfield toy sculpture. The light source is from a small flashlight. I held it at different angles of interest and took many reference photos. (No, I did not paint it from life in the dark - haha.) I liked this view: the lighting (like he's being interrogated) along with his smug face. This was only intended as a study, but I liked where it was going and decided to really polish it.
Posted by Jono Doiron at Wednesday, July 11, 2018 No comments: 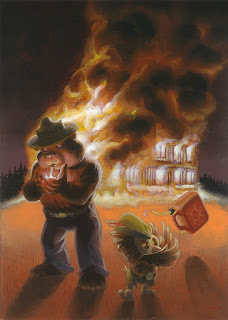 In celebration of Earth Day this past April 22, I made this painting as a satiric look at animals retaliating against human encroachment. 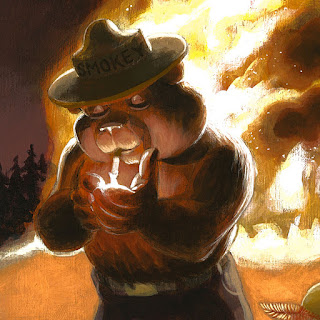 "Burn down my home, 'an I'll burn down yours!"
Smokey, NO!
And who's his accomplice? 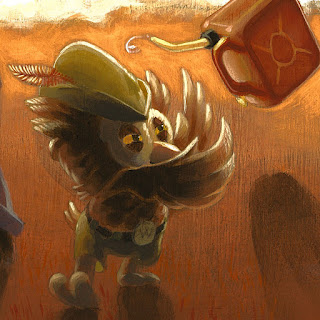 Woodsy the owl! YES, the "Give a hoot, don't pollute" owl! And what's he doing?? LITTERING!

The level of disrespect for residential property in this painting is appalling. It's also jesting one of cinema's most painfully prolific cliches: tough guys walking away from explosions. (Yes, I know about the Lonely Island song on that topic, I've seen it - thank you.)

As harsh as their retaliation may be, a lesson needs to be learned here, folks. It's like that famous Ghandi quote: "A burned down home for a burned down home makes the whole world a giant f#€%!&@ pile of ash." I think he said that when he took the stage at Woodstock. (If I remember correctly... )

Anyway... buy this painting or I'll burn down your home. 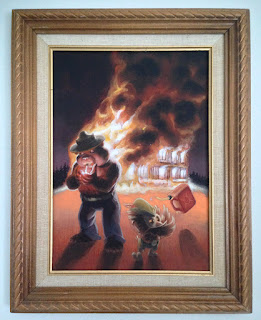 'Up Your Arson!'
Acrylic on masonite

Happy new year! Here is my first painting of 2018 I finished recently. 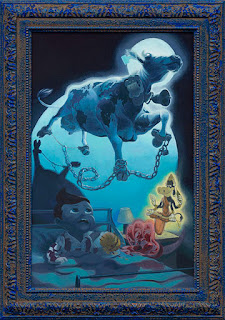 This painting was inspired by learning more about the history of domesticated cattle.

Two of the three biggest economies in the world (the United States and India), have cattle derivatives infused in their diets in opposing ways. India is the country with the most populous vegetarians, who flex Lacto-vegetarianism (dairy products are nourished, but not eggs or meat). In the United States (the second most meat consuming country in the world), both dairy and the animal itself are also eaten.

What struck me was the contrasting treatment of the animal between these two cultures: while one has chosen to praise the animal for the gifts it's brought humanity, the other has chosen to enslave it.

Agriculture is the very thing that has allowed human beings to no longer be nomadic.  (Some Environmentalists would say that was the beginning of the end.) An omnivorous diet has long been customary to human existence and livestock practices were adopted shortly thereafter. So while consuming meat has historic longevity, it's a fastidious topic because the efforts required to satisfy our demand for it now are compromising our environment. 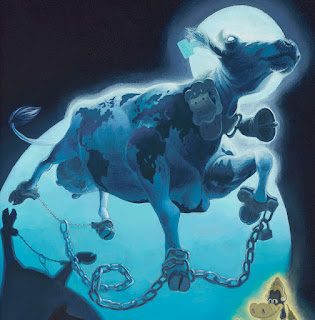 The cow apparition denotes the often incarcerated reality of the animal. The markings on the cow, common on North American breeds, take the form of the world's landmasses representing our global rapacious appetite for beef. 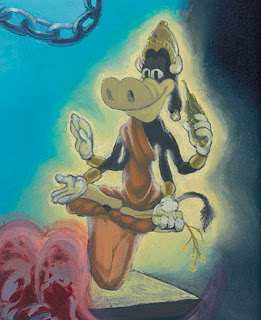 Clarabelle cow in the image is dressed as a Hindu deity and represents an ahimsa path. In her upper left hand she holds a bitter melon and her other left hand retains mustard flower (common ingredients in Indian cuisine). 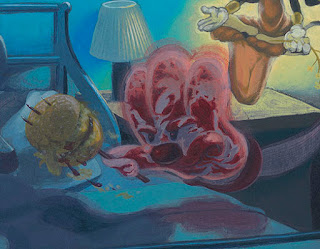 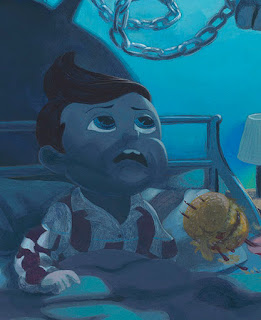 The popular burger chain mascot, Big Boy, sits under a shadow of fear at the sight of the ghostly cow above while undecided on the two paths he has been presented with.