Tonal study is all done! Here is a much better image of the top half of the drawing for the #painting 'THAT LAUGH!'.

This drawing will be for sale once the painting is completed for anyone interested. To be contacted once it's available, please send me an E-mail with your request. 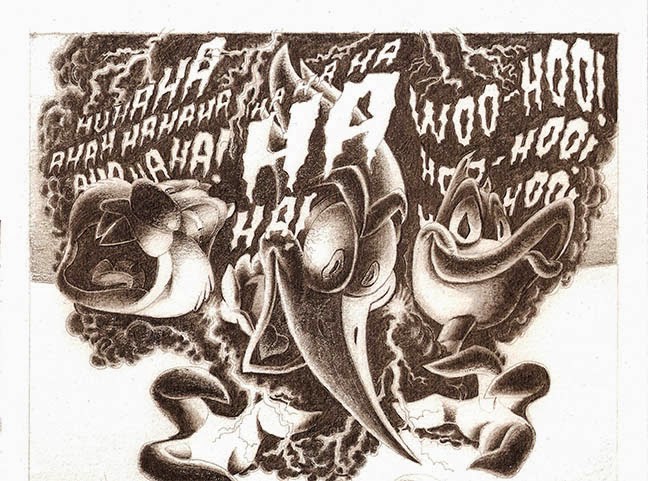 Been juggling a few things at the moment. Here is more progress of the #painting 'THAT LAUGH!'. I'm doing a detailed pencil study of the image first this time. Some of my favorite artists work this way and I had wanted to do one for a while. (The last time I've done a tonal study in pencil, I was in College.) 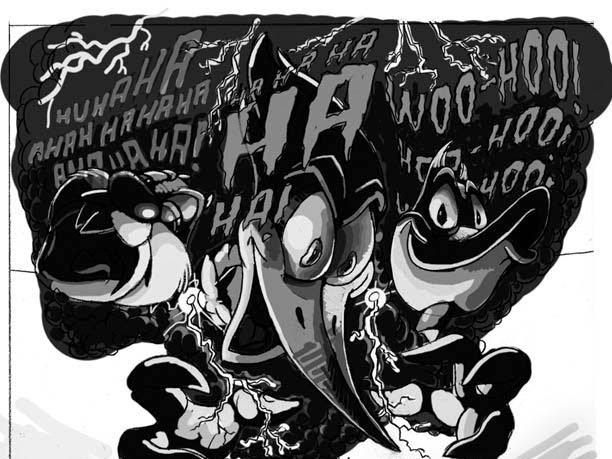 You may notice I switched up the drawing of Screwy Squirrel (the character on the far left). Showed the image to a friend of mine who suggested all the characters should be laughing as the intent and title suggests - apposed to Screwy who (previously) was repeating a phrase. Thought that made sense, so I redrew him. (You can compare with previous images in the earlier posts below.) 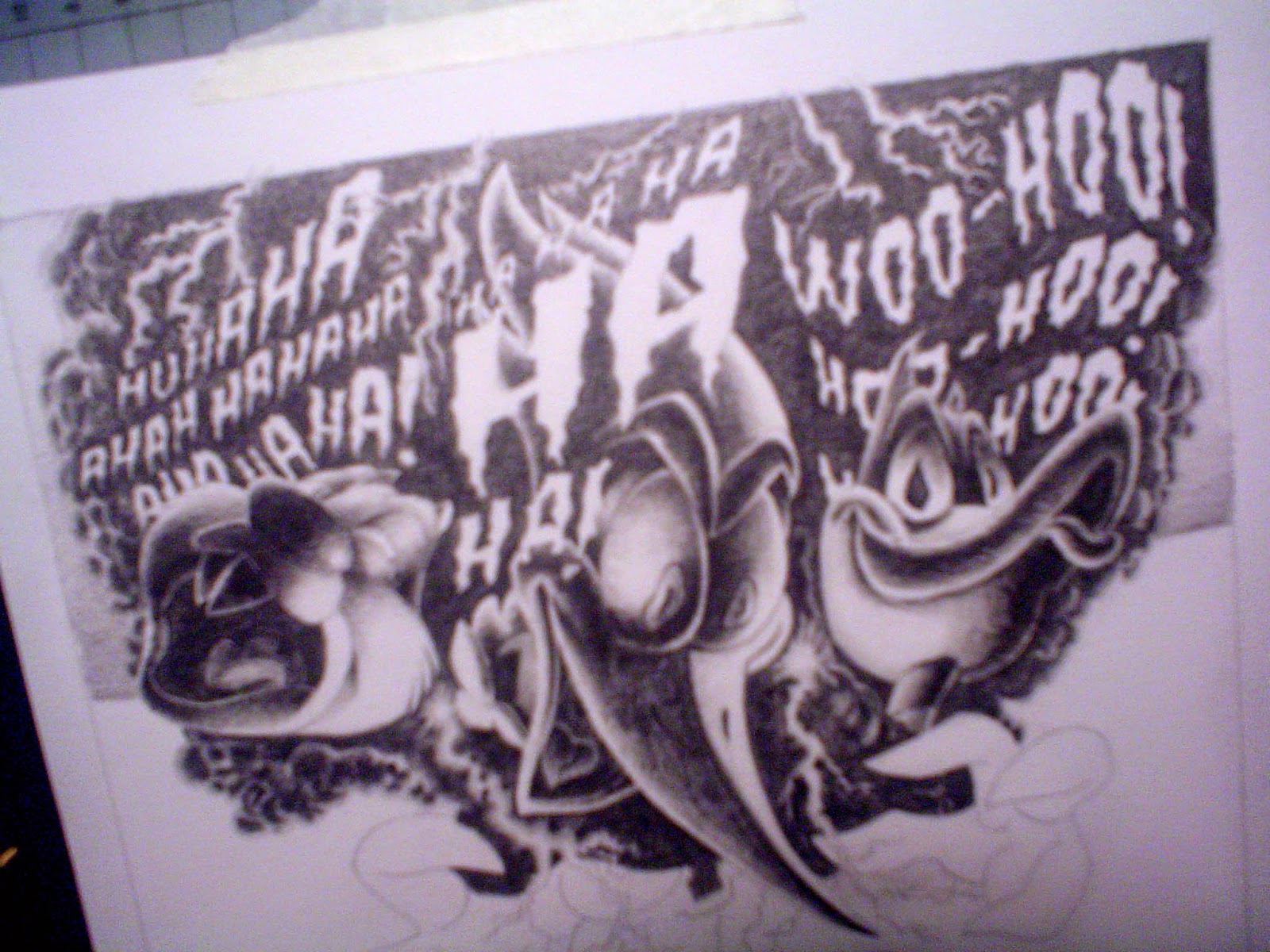 Tonal study in pencil. (Still working on it.) The final drawing will be available for purchase on my online store once the painting is completed. 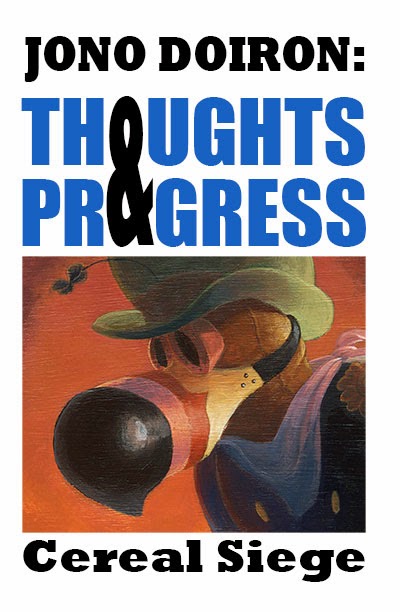 It's finally out! I'm excited to share the process with you I undertook to create the painting Cereal Siege. My Thoughts & Process booklets document the concept up to all the drawing and process necessary to create the final paintings. Each booklet begins with an essay chronicling where the idea came from. You can read the essay for Cereal Siege in it's entirety below:

Click here for more info and to pick up your copy of the booklet.


When I was a child, I fondly remember the sugary breakfast cereal commercials. Wild, colorful, entertaining and often far better animated then the shows they were interrupting.

It's always remained a large state of bewilderment to me that healthy cereals never adopted the same successful campaign methods as their sugary brethren. Why not a cartoon determined to attain nutritious vitamin enriched cereal? Engaging cartoon personalities used to sell product has brilliantly worked every generation since it's inception - it's marketing gold. Such marketing methods have operated my consumer choices to this very day. (Even products I have yet to buy! What automotive tire company do I plan to commit my loyalty to? I'll give you a hint: they have a mascot.)

My Mom, a nutritionist among other practices, would never buy any of that sugary shit. The closest she ever came was Rice Crispies or Shreddies. Both of which do contain sugar, but not as blatantly as other contenders. Visiting the cereal aisle in my youth, was like an art gallery to me.  My rampant irrational desire to meet real life cartoon characters was brought to close proximity. I saw them on TV, and there they were! Buying (my parents did the buying) products with cartoon characters on them felt to me like I was initiated into their world. In reality, I was introducing them into mine.

The greatest influence for the painting Cereal Siege actually did not directly come from a cartoon character though. Neither was it triggered by breakfast cereal. One of the bleakest times in recorded human history is the bubonic plague (or, 'Black Death' as it's also called) that devastated Europe and erased a third of the world's population. During this grim time, doctors (and some later to be found charlatan's posing as doctors) wearing a long cloak, rimed hat and a beak like mask containing purifying herbs were committed to aid the population ridden with the harsh symptoms.

I always loved that costume. I was intrigued by the history behind it and found it far more foreboding then the traditional image of the grim reaper. This was a grim reaper who actually existed. 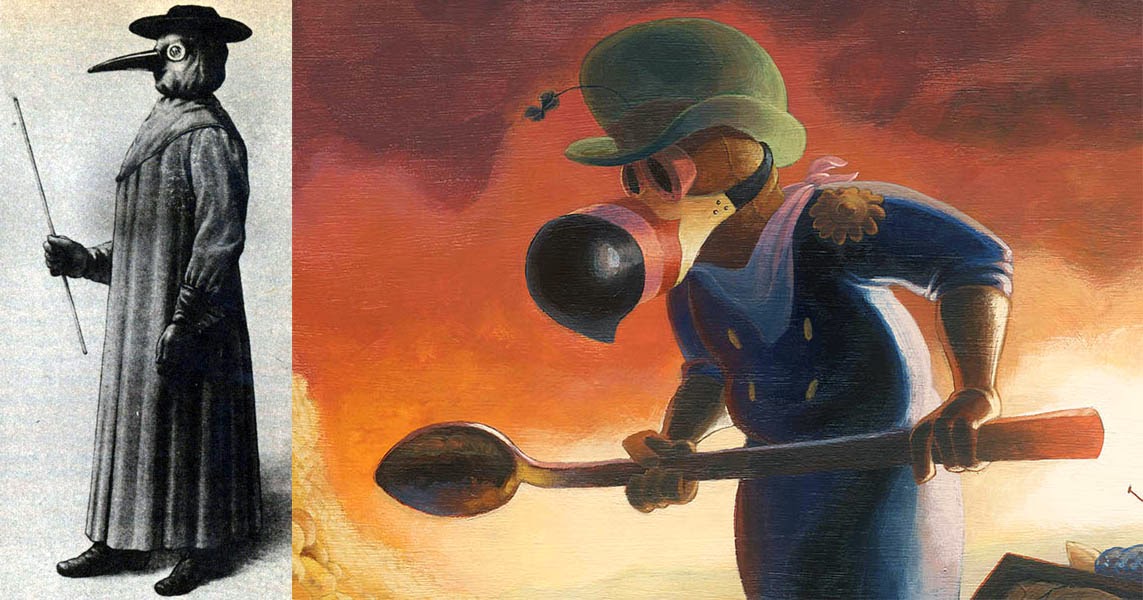 Because of my restless cartoon influence, the more I looked at illustrations of the attire, the more I associated it with clothing articles of breakfast cereal cartoon characters. It started with the mask: I thought 'what if this character had a beak like Toucan Sam?'. His hat was not far in resemblance from Lucky, the Lucky Charms mascot either.  I gave him Frankenberry's goggles, Snap's scarf and Captian Crunch's modified overcoat. Instead of a cane, the obvious decision was give him a large cereal spoon.

That would make an interesting character to paint - but it wasn't enough. I asked myself: 'What would be the REASON for this character to exist?. What environment could he possibly be the product of and why would his services be required?'

A painting like Cereal Siege can become kind of editorial, so I do research to determine if there is any truth to what I am trying to say. What are the dangers of sugary cereal? Effects include feeling hungrier (once blood sugar levels fall back down) which can lead to building a dependency and a lack of concentration. Sugar is an addictive substance. It can be hard to quit because it's in nearly everything and is perfectly legal. I also found a CBS News listing for the 10 most (worst) sugary cereals and chose to reference as  many from the list in the final painting (either through the central character's uniform, the landscape the mascots themselves). The final painting presents a world where those effects have taken place with the result ultimately open ended. It's ambiguous whether Sugar Bear is dead, sick or strung out. The central character, the 'Breakfast Beak Doctor', is he there to help him, kill him, report him?

Cereal Siege is also a noteworthy painting for me, because it was made under the guidance of professional illustrator, Charles Vinh. SynStudio is an art school in Montreal where Charles teaches and offers classes in traditional and digital art. The class I took with Charles was called Illustrative Painting.  The class taught pragmatic steps for the development of narrative imagery used by classical illustrators. An entire class on how to plan your work so you can achieve your best work. The stages were already quite aligned with my painting process anyway - but you can always learn more efficient ways to do things. I certainly learned some invaluable steps that will advance my future paintings.

Cereal Siege is a painting I was planning to do anyway, but had not yet begun, so I chose to pursue it for Charles' class. It was completed in March and I'm convinced the result is much better than I would have achieved on my own. What follows in this booklet is all the effort that went into making the final image. Eat up! 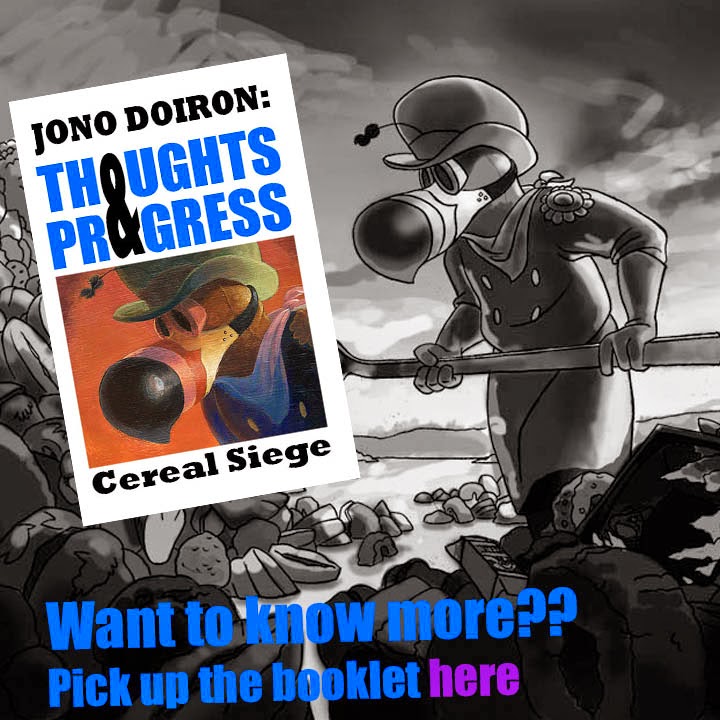